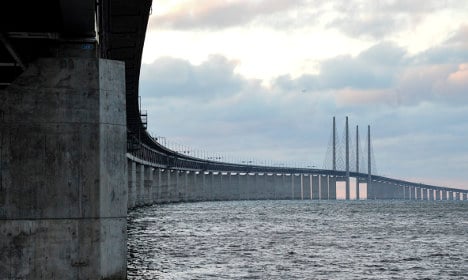 The 16km Öresund bridge is a railway and motorway crossing between Copenhagen and Malmö. Photo: Johan Nilsson/TT

The alarm was raised around midnight on Tuesday. Police arrived at the scene and seized the individuals in the tunnel section on the Danish side of the bridge.

“They were walking in the tunnel and were then taken back to Denmark. It is illegal to walk through the tunnel and on the motorway,” Lars Westerwill of Copenhagen Police told Sydsvenskan.

Train traffic on the bridge was not stopped due to the incident, but the service ran at reduced speeds while police carried out the arrest.

“We will now try to find out who they are and whether they have a residence permit in Denmark,” Westerwill added.

There have been frequent attempts to cross the Öresund bridge between Copenhagen and Malmö in the past year. In May, a group of five asylum seekers became the first people known to successfully reach the Swedish side on foot.

Heat sensors have been installed in the railway tunnel on the Danish side of the crossing in an effort to catch pedestrians trying to walk through it, while there is also an extensive network of cameras monitoring the structure.

One reason for taking the potentially fatal risk of trying to cross the busy bridge on foot is to evade ID checks started by Sweden in January.

The checks were brought in shortly after the introduction of police border controls in response to a record 163,000 people seeking asylum in Sweden in 2015.

On Wednesday evening the bridge will be closed temporarily for a major exercise involving Danish and Swedish emergency services. More than 200 people including police and actors will stage an incident designed to test authorities' preparedness for emergencies.