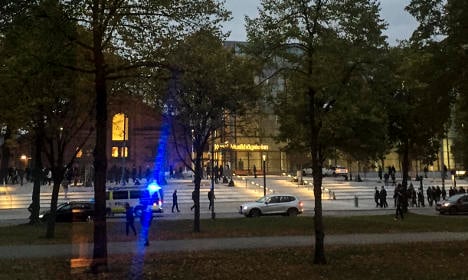 Supporters clashed both inside Stockholm's Olympic Stadium and on nearby streets. Photo: Tina Magnergård Bjers/TT

“What that means is, put simply, that this person is the one who tried to incite others to be violent towards the police,” Stockholm police spokesperson Kjell Lindgren told news agency TT.

The man was arrested for allegedly leading a riot on the streets near Stockholm's Olympic Stadium before the match kicked off on Tuesday evening. Hammarby and Djurgården are local rivals and share a stadium at senior level.

More problems followed during the game itself. Shortly after Hammarby scored the opening goal, members of the two supporter groups left their sections to confront each other in the arena.

The referee decided to suspend the match and remove the players from the field of play. Brawls broke out both inside and outside the stadium, according to Stockholm Police.

The match eventually resumed and Hammarby went on to win 2-1.

Violence at Swedish football grounds has received significant coverage in recent months due to a number of high-profile incidents. Notably, a match was abandoned in August when a masked supporter ran onto the pitch and assaulted Östersund goalkeeper Aly Keita.

Last month the Swedish government announced it will ban the wearing of masks by spectators at sporting events in an effort to tackle the problem.

Speaking to The Local on the day the ban was announced, the CEO of the Swedish Football League highlighted their attempts to reduce violence at Swedish football matches.

“There have been positive developments when it comes to violence at our arenas, it is extremely rare today,” Mats Enquist insisted.