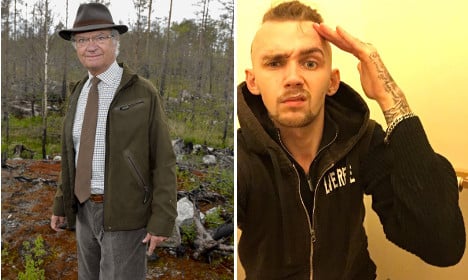 But that couldn’t be further from the case, according to King Prenborn. He told The Local that the unusual choice of name actually has a history dating back more than ten years.

“From the age of 12 I always listened to a Swedish radio station called Bandit Rock,” he explained.

“The DJs there used to use the word ‘King’ to describe everything, so it started there. Then it continued with me calling stuff ‘King’ all the time. So for example, instead of saying ‘Damn, that’s cool’, I’d say ‘Damn, that’s King’. That was probably the decisive factor in choosing the name.”

“After I changed my name I stopped saying it though. That would be like you saying ‘Damn, that’s Lee’. That would be weird,” the 23-year-old told The Local's reporter Lee Roden.

King has been the Stockholmer's name for five years now, and the process of making that happen was surprisingly simple.

One morning, while traveling home from a party, he went into a Swedish Tax Agency (Skatteverket) office to do the deed, and there was little resistance when he showed them the title he wanted:

“It was early in the morning. They helped me find the papers I needed to fill in, and they behaved professionally from what I remember. But they maybe thought I was just recently woken up and not drunk.”

READ ALSO: Swede wakes up with Justin Bieber on buttock

Reactions to the name have varied from calm among his family, to disbelief among strangers, particularly after the story went viral in Sweden when it was shared by the site Omtalat earlier this week.

“My family and friends supported me in my decision and thought of it more as being a fun thing that I chose to do. But my family still call me Oliver. Among my friends it’s mixed,” he noted.

“The most common reaction among new people is ‘what are you really called? Nah, you’re lying, show me your ID then’. When I show them they always look a bit more astonished.”

And after five years, King is here to stay, he insisted.

“There was a time when I was thinking of changing my name back, because I found out that you could buy the title ‘Lord’, and ‘Lord King’ doesn’t sound so great,” he mused.

“But those thoughts passed, and I identify myself with the name King. So if I change my name again or add something new, that part will stay.”