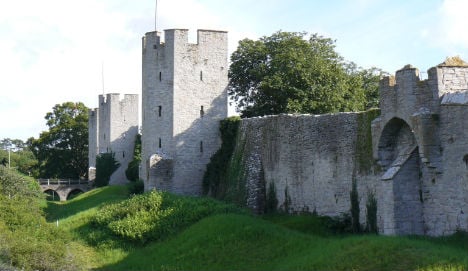 Visby's medieval city wall. Photo: Żeglarz/Wikimedia Commons
The alleged rape has awakened strong feelings, both among people living in the island and among far-Right groups who claim the five suspects are asylum seekers.
On Saturday, the populist anti-immigration Sweden Democrats party is holding a demonstration in a central square in Visby, the island’s medieval capital. Then on Sunday, a rival demonstration will be held by the left-wing, pro-immigration Feminist Initiative and Left parties.
At the start of this month, five men were arrested over the suspected rape of a woman in the medieval town of Visby, but they were later released after the prosecutor judged there was not enough evidence to have them remanded in custody.
The woman claims that she shared a taxi home with one of the men and then stopped off at his house to use the toilet. She claims that the man then began to rape her, with four other men later joining him.
The man claims that the woman came home and engaged in sex voluntarily, and that no others were involved.
Police are awaiting the results of DNA test which will determine whether the woman was penetrated by one man, or by several as she has reported.
The unrest flared up after activists from Nordfront, a neo-Nazi group, accosted an Afghan man at the address where the alleged rape occurred, and spread a video of the encounter on social media.
Mats Hermansson, the Bishop of Visby, said he hoped Sunday’s demonstration would make a stand against both violence against women and the growing demonisation of immigrants.
“I hope that all the good forces in Gotland society come together,” he said.  “It is central to the Church to stand up for the equal value of all people, and this demonstration is about this in two separate ways. First, it’s that women should not be at risk of violence in public places. Secondly, we face a growing xenophobia, a hatred for the other which we must tackle.”
The former prosecutor on the case, Mats Wihlborg, quit the case last week after several men came to his house and made death threats.
Police sent a back-up to the island when the men were released from custody, sparking a march in the town which saw anti-immigrant activists pelt an asylum centre with stones and accost immigrant men in Visby to accuse them of being involved in the alleged rape.