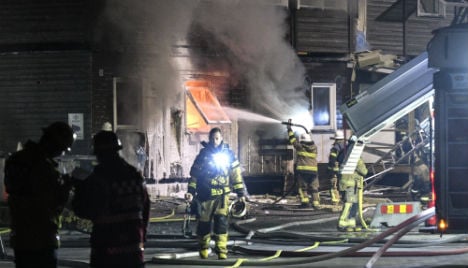 Stockholm fire personnel at the scene on Sunday morning. Photo: Johan Nilsson/TT
“The fire is under control but there is still a fire in some parts of the building,” Ulf Tholén from the Stockholm fire service told TT newswire at 9.45am on Sunday morning. He said he expected the fire to continue burning for at least three more hours.
A police patrol discovered the fire at the centre in Fagersjö, southern Stockholm, shortly before 1.30am, alerting staff at the centre, who began to evacuate the residents.  “It was one of our patrol as who were passing by and who saw that the facade of the building was on fire,” Carina Andersson, from the Stockholm Police, told the newswire.
Police are investigating the crime as a serious arson attack, but so far have no suspects.
“It’s going to take some time before the technical investigation  can be carried out, and of course we will interview everyone who was on the scene,” said Sven-Erik Olsson from the Stockholm police.
The fire came only a day after staff at the centre discovered and prevented another arson attempt. A canister of oil had been put in an oven which was then set at a high temperature.
The asylum centre is for immigrants who have already been granted permission to stay in Sweden. It houses 37 residents in two blocks of 13 housing units.