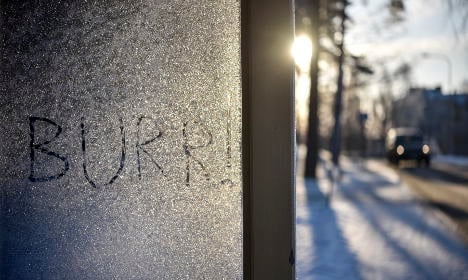 This is how one Stockholmer got their point across last winter. Photo: Anders Wiklund/TT

The DMI’s new three month forecast highlights the possibility of snow and cold air across Scandinavia in December and January following an uneventful November.

If the prediction proves true it could mean the coldest winter in Sweden for some time, which has seen relatively mild temperatures through the period in recent years.

The explanation comes from a weak jet stream combined with high pressure, which there are signs of north of Denmark. In the winter, high pressure means cooler temperatures.

“If the prognosis is accurate, it means a weakened jet stream. A weak jet stream increases the likelihood of high pressure being blocked over northern Europe and Siberia,” the DMI wrote on its website.

Anyone already excitedly planning weekends ice-skating in Stockholm or cross-country skiing in Gothenburg should temper their expectations for the moment though. Making long-term forecasts is a notoriously tricky business, and the DMI also pointed out that uncertainty in their prediction increases from December onwards.

Meteorologists in Sweden also emphasized that winter predictions are prone to change.

“The winter forecast is always done a long time in advance, but it usually changes quite often. It should be taken with a pinch of salt: when a new forecast is done, everything could look different,” Swedish meteorologist Kristoffer Molarin told newspaper Göteborgs Posten.

READ ALSO: Why I can't wait for a proper Swedish winter