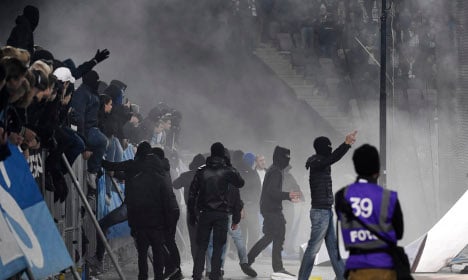 The fixture between Djurgården and Hammarby – who share the Tele2 Arena stadium in southern Stockholm – was almost 80 minutes in when the referee decided to remove both sets of players from the pitch and stop the clock, with Hammarby winning 4-2.

A number of supporters in the Djurgården end had started to throw flares and projectiles towards security personnel, before several climbed over the barricades. Some entered the pitch itself, while others damaged advertising boards.

The match was suspended for almost 30 minutes while police officers wearing riot gear removed people from the site of the confrontations. The Hammarby supporters responded by singing the Monty Python comedy song “Always Look on the Bright Side of Life”.

The final 10 minutes were eventually played, with no further goals scored.

Stockholm Police said on Monday that a number of police reports had been filed, and several people were arrested for rioting outside the arena after leaving the ground.

“We had a riot after the game where six people were arrested. Two colleagues were injured as a result, one had to go to hospital to have a hand injury checked,” Stockholm Police spokesperson Lars Byström told news agency TT.

“A report has been prepared on violence against public servants, as well as several reports on breaches of the public order act, to do with what happened in the stadium, the pyrotechnics and people running onto the pitch,” he added.

“We have to take responsibility for our section. And there are shortcomings. What I saw was not acceptable. It’s an embarrassment for Djurgården,” he told newspaper Dagens Nyheter.

Monday’s disturbances occurred only a week after scuffles broke out between supporters of the same two teams during an U21 football match. One man was arrested accused of leading a riot.

In August meanwhile, a match was abandoned when a masked supporter ran onto the pitch and assaulted Östersund goalkeeper Aly Keita.

In September, the Swedish government announced that it intends to ban the wearing of masks by spectators at sporting events in an effort to stem fan violence.

Speaking to The Local on the day that the ban was revealed, the CEO of the Swedish Football League insisted that efforts have been made to cut out the problem.

“There have been positive developments when it comes to violence at our arenas, it is extremely rare today,” Mats Enquist said.