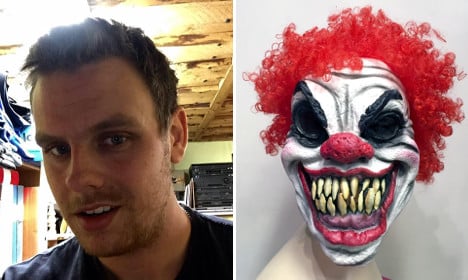 What the clown failed to notice was that the woman was with her 24-year-old grandson, 1.96 metre (6’4”) tall farmer Mattias Roos, who was so startled by the prankster that he reacted instinctively by punching him in the face.

The clown fell then fled the scene, seemingly given a scare of his own by the burly Swede.

“He was trying to scare me and reflexes kicked in. I didn’t really understand what had happened – I’ve never really seen anything like that before,” Roos told The Local.

“I don’t really understand the point in the whole thing. I understand when someone pranks their friends, but scaring the general public is idiotic I think,” he added.

Last week The Local reported that police in Sweden have been swamped with emergency calls as a result of the clown trend, with examples including a knife-wielding clown chasing people in the town of Ronneby, and a 15-year-old girl being chased by a group of clowns in Dalarna.

But it seems the clowns could also be putting themselves in danger if they cross the wrong person.