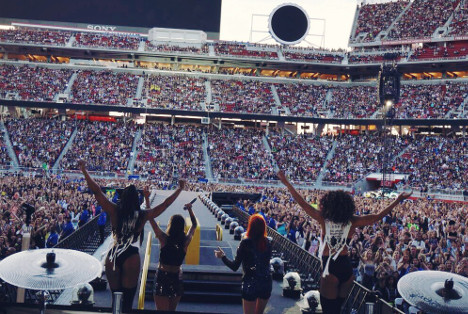 Revenues in the Swedish music industry rose by one billion kronor to 9.2 billion kronor in 2015, marking a 13 percent increase from the previous year, show new figures from Musiksverige, an umbrella organization representing record publishers, labels, artists, and songwriters in Sweden.

But that ever-expanding income doesn’t mean the industry can rest and coast into a bright future, says Linda Portnoff, head of Musiksverige.

“We need to look more closely at the effects of having a small cadre of successful superstars and the rise in digital distribution and consumption,” she explains.

Looking at the 2015 figures, concert revenues climbed to 4.8 billion kronor, accounting for slightly more than half of the industry’s total income. The next biggest share of total music industry revenue comes from royalties (2.3 billion kronor, up 7 percent) and music sales (2 billion kronor, up 12 percent).

The 14 percent upswing in concert revenues was the largest year on year increase since Musiksverige began measuring such figures back in 2007.

“The problem in the live industry today is that we don’t have enough mid-sized clubs,” he says.

“It’s a huge jump from small clubs to major concert venues. The lack of mid-sized venues creates a hurdle that many artists simply can’t get past, which means that many emerging acts can’t get the traction they need to make it big. It’s hard to climb up the ladder when all the middle rungs are missing.”

In explaining what lies behind the industry’s growth, Musiksverige cites strong attendance at concerts held in Sweden by international stars, as well as growing interest in Swedish music abroad.

Swedish music exports grew by 21 percent to 1.7 billion kronor in 2015, largely thanks to the work of hit-makers and producers like Max Martin – and aided by a favourable exchange rate.

A third contributing factor is the increase in revenues from streaming services like Spotify. Paradoxically, however, physical music sales – such as CDs – increased for the first time since 2009. And sales of vinyl records in Sweden generates greater revenue than that derived from YouTube, now considered the world’s largest digital music service.

“A huge portion of the value created by the Swedish music industry ends up outside the industry itself and in the coffers of foreign digital platforms [like YouTube].”

To combat the latter challenge, Portnoff calls on YouTube – which she calls “the MTV of our era” – to pay for a music licence similar to the licencing system in place that compensates artists when their songs are broadcast on television or radio. But taking on a company like Google is no easy task.

“We need help from the powerbrokers in Brussels and Musiksverige’s member organizations are pushing on all fronts to enlist support from politicians who are shaping the development of Europe’s digital inner market,” she says.

Portnoff also characterizes the uneven income distribution in the music business’ ‘winner-take-it-all’ economy as a “vulnerability” for the Swedish music industry that could have harmful long-term consequences.

“We’ve got great success at the top, and then a huge number of passionate but slightly disillusioned entrepreneurs who are struggling to survive. But we’re missing a healthy, vibrant mid-range where a wide variety of artists and songwriters can earn a living,” she says.

As Portnoff sees it, the challenges plaguing the Swedish music industry are part of a larger trend highlighted by the likes of international aid organisation Oxfam and economist Thomas Piketty, among others, whereby half of the world’s total assets are concentrated in the hands of less than one percent of the population.

But rather than try to tackle a complex, global phenomenon, Musiksverige remains committed to doing what it can in its own backyard.

“Our mission is to work to create the best possible conditions for Swedish music to be created and distributed both in Sweden and internationally. We’re trying to strengthen local acts that have an increasingly hard time reaching listeners who now consume music through popular playlists dominated by international acts,” says Portnoff.