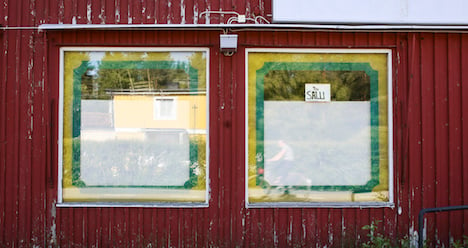 A closed store in the Swedish countryside (library photo). Photo: Helena Landstedt / TT
There are lots of things that unite Brexit, Trump and populist movements in places like Sweden and France. And perhaps the least discussed of these among the much maligned urban elites is that their supporters are overwhelmingly provincial.
The Guardian released an incredibly telling video this week from the district in the US that voted most strongly for Donald Trump in the Republican primaries. The coal mines were gone, unemployment was now endemic, WalMart was boarded up and the pumps at the local filling station no longer pumped gas.
For the people of McDowell County, West Virginia, Donald Trump’s (probably worthless) promises to reopen the coal mines was a concrete acknowledgement of their pain. At least he’d seen them. Meanwhile, the local Democrats were reduced to wishful thinking: wouldn't this be a great place for Amazon to open a depot?
If you spend any length of time in the post-industrial provinces of Sweden, France or Britain, the picture is the same. Industries – steel, fishing, mining – have either ceased to exist or now get by with a workforce radically reduced by technology.
Meanwhile, the towns that used to house them are denuded of shops, banks, restaurants – everything that makes a place tick. My local town in the Bergslagen region, Sweden’s former mining heartland, once had small factories and a passenger train line to Stockholm. The trains stopped in 1991, the industries employ fewer and fewer.
The population, 2000 in 1980, was barely half of that thirty years later. The supermarket, bank and pharmacy are still there, but three of the other stores on the high street have been turned into junk stores. These are the town’s growth businesses – them and the reception centre for asylum seekers, its smashed windows held together with tape.
The Swedish Prime Minister boasts like his predecessor about the strength of the economy, about how the country has higher growth than the US, but this feels distant in Bergslagen. At the last election, the Sweden Democrats more than doubled their share of the vote in the town to around 20 percent (they scored twelve percent nationally, and now score about 17 percent in polls). In a nearby settlement (with an asylum centre of its own), they were on 34 percent.
As one analyst put it at the last election, the party’s voters “live a long way from the centre of politics. They don’t feel that politicians are there to solve their problems.” The elite’s endless chatter about identity politics – feminism, gay marriage, debates about racial identity – isn’t so much unpopular as foreign and irrelevant.
For these voters, it’s utterly uninteresting that the economy is growing in the city centres.
Seeing your home slowly die has a profound effect, even if you personally manage to get by. Moving to an expensive, crowded, snooty, chaotic metropolis to work is not an solution people are prepared to accept.
Places, with history, bonds of family and a sense of identity, can't and shouldn't be wished away. When urban elites sling accusations of racism, it pushes people further away. And if the politicians won’t listen, they will be sent a message.
In Britain, the run-down, forgotten towns of England used the Brexit referendum to send just such a message. Places that used to be centres of manufacturing but had now declined were among the most Brexit-friendly. It’s striking to visit my childhood home eastern England – one of the most pro-Brexit areas of the country – and note the same boarded up shops and sense of abandonment you feel in Bergslagen. In Picardie in France (National Front vote share: 40 percent), the picture is the same.
But this will probably get worse. Ann Mettler, head of the European Commission’s internal think tank and one of Brussels’ most influential women, says it with alarming bluntness: “We will see massive job losses” in the next few years as technological change gathers pace, she told a Stockholm seminar last week.
The axe won’t fall evenly: many highly qualified jobs will be safe – jobs that require a high level of education and good social skills like teaching or law, and many tech jobs. So will some more menial jobs – cleaners, for example. It’s those semi-skilled jobs in the middle, the jobs that once supported many a small town, that will go.
In Sweden, Ericsson’s decision this month to cut 3,000 small town jobs, underlined the problem. Analysts predicted that the company could eventually be broken up, further adding to the woes of small town Sweden.
Bashing Europe, globalisation, free trade and immigration isn’t going to help these places, of course. We will have to adapt to the technology that is driving the changes in our economies, and railing against the trade agreements that harmonise regulations and cut tariffs is counterproductive. Protecting uncompetitive industries behind national walls just postpones the problem.
There’s no easy way out of this – completely new thinking is required to shift the focus away from our crowded capital cities and back to the provinces. But populism is a clear threat to our political system and our way of life, and as long as elites keep treating the moribund provinces as an afterthought, this risk will grow.