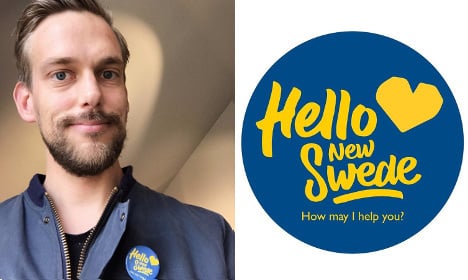 Thomas Bergman came up with the idea for his “Hello New Swede” badges around Christmas last year, when the influx of refugees to Sweden was a particularly hot topic. Inspired by other social campaigns from years gone by, he decided to try and do something to prove that there are plenty of Swedes out there who want to help.

“At first I thought it would be good to have a way of showing you can speak different languages and could help with translations, that was the first idea,” Bergman told The Local.

“Then I thought that since this whole topic has become so difficult, you could have a symbol that shows you’re sympathetic towards people who have come here. That you’re friendly towards newcomers.”

Bergman’s hope is that the badges can also bring more positive attitudes about newcomers and refugees to the fore:

“You can easily get the impression from the media and opinion polls on the Sweden Democrats that make you think ‘is this how it is?’. I thought that with these pins that image could be changed: if you see people on the subway, or on the bus wearing one, and see lots of people supporting it, then maybe you’ll think again.”

VIDEO: Are all Swedes really so unfriendly?

So far the new campaign is going well. The 37-year-old sent off around 100 badges just before The Local spoke to him on Wednesday, and the orders are coming in fast.

His plan is to donate any possible profits to charity once the expenses of postage, packaging and production are covered.

“I didn’t know if it would work to be honest, if anyone would buy them, so I hadn’t even thought of what to do with the money. Now the idea is to find a relevant charity and send any profits there. It won’t be a lot of money though, it’s not a lot of kronor per badge,” he said.

“I give away a lot of the pins: to everyone I meet who wants to have one or several of them. So I’m not getting money for many of them anyway.”

As for the notion that Swedes are cold, Bergman has his own explanation for that:

“Swedes are generally maybe not the type that speaks to strangers on buses for example, but I think there are many people who are friendly once you choose to speak with them. This badge can work in that way too: as a little opening, something you can start a conversation with someone about.”