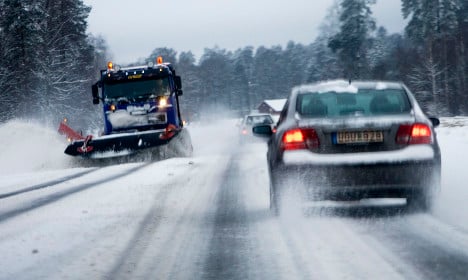 This shot of snow in western Sweden may not be as far away as you think. Photo: Johan Eklund/TT

According to meteorologists at Norwegian weather institute Storm Geo, there is a chance that cold air over Norway could move over the border in the coming days, resulting in snow over Värmland in western Sweden on Saturday.

“There’s no big winter drama on the way, but right now there’s a lot of cloud, and when it clears up it could become frost. And with the cold air over Norway and the western hills moving a little further south there’s a chance that northern Värmland will get snow over Saturday,” Johan Groth of Storm told Swedish tabloid GT.

“It’s nothing I would start waxing my skis for, but there is the chance of the season’s first snow appearing in Värmland at the weekend,” he added.

The snow would be the first of the winter season for western Sweden, but readers in the north of the country could be forgiven if they are nonplussed. Residents of northern town Kiruna already saw snow in June, with enough falling to build summer snowmen. A child finishes off his snowman in Kiruna last June. Photo: Johan Ylitalo

The Åre ski resort meanwhile celebrated an unexpectedly early start to their season when snow fell in the second week of August.

Southerners shouldn’t take too much pleasure in the chilly conditions the north has to deal with though. Earlier this week the Danish Meteorology Institute predicted a harsh winter across Scandinavia, meaning Sweden could be heading for its coldest winter period in some time.