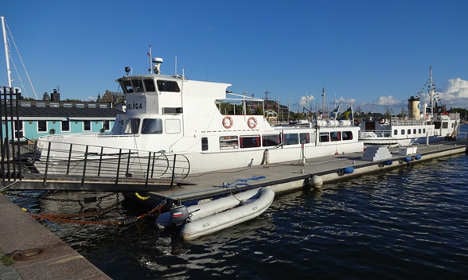 At the beginning of October a boat set off from Strandvägen in Stockholm, but unlike the many tourist excursions departing the quays, this one goes on its travels only twice a year, and it is full of books.

In Sweden – I discovered on a recent visit to the country's capital city – books take to the water.

Each autumn and spring the Stockholm Library Service charters a boat and for a week, travelling north to south in a big curve, it visits many of the outlying islands of the archipelago to provide a floating library service.

The timetable for stops is published and the boat is met at a number of watery locations by islanders with baskets of books from their last borrowing. They return the books and stock up with reading for the season ahead. Some have been using the service for most of their lives.

The librarian who organizes the Book Boat is Annika Lissenko and she spoke of meeting an old man who had been borrowing from the boat since 1953 when the service started. In those days the boat was borrowed from the Navy.

Sweden cherishes its book experiences. I visited the island of Svartloga in the far reaches of the archipelago, and at the quayside is a small hut where people waiting can shelter from the cold and wet while waiting for the ferry to arrive. The hut is lined with books to be borrowed freely and returned or swapped, a kind of informal book depositary.

Books in the islands find strange and unconventional homes. Many island libraries are in social settings, like stores or in schools, and the Book Boat service makes it a priority to connect with island schools as well as favouring old people and those with special needs. The service is operated by the Stockholm Libraries in conjunction with four of the outlying local authorities who contribute librarians to the service. Something similar operates in Norway and in Canada, but in global terms the Stockholm Book Boat is a relatively unique cultural provision.

What started out as a service for fishermen and island workers now supplies reading matter for the many people who live on the islands and for whom a season in the archipelago without something to read is inconceivable. These are people for whom a Kindle or a tablet is not enough, people who like real books.

They have 10,000 to choose from on the boat, and can order books from the Central Library stock to be brought out on the boat. Thrillers are ever-popular, Annika says, as is fantasy fiction, and books written by local authors which reference the particular remoteness of the islands. “The Fly Trap” by Fredrik Sjöberg has been a recent favourite.

Meanwhile, back in central Stockholm, books are also likely to find a home on the waters which intersect the districts. I take a trip on the Hammarby Ferry which follows its short triangular route around the harbour of this newly regenerated area.

Inside a passenger shelter on the boat is what may be the world’s smallest library, two shelves crammed with books. As at Svartloga, the books are free to be taken and others deposited, and on my trip there is a young guy in a baseball cap kneeling at the shelves explaining excitedly to his friend about the books, taking out and waving around a few favoured paperbacks.

They are, it turns out, travelling on the ferry to reach a retail outlet to buy some discounted trainers, and this encounter with the bookshelf is a bonus. My new baseball cap-wearing friend is hot with views on the world. “It’s all about solidarity!” he says. The numerous copies of John Le Carré novels on the shelves may not be his preferred reading, but I am momentarily wrong-footed by this outcropping of book-culture in an unexpected urban setting.

Book-boats, ferries with libraries, huts lined with books: “real” reading seems to be alive and well in Sweden. As I settle down to my own bedtime book back home, picked up with insouciant ease in my local book-shop, I can’t help letting my thoughts wander to the watery expanses of one of the world’s most watery cities, To those many individuals turning to their basket of books, and their season’s harvest of reading to choose something with which to pass a moment in their chosen remoteness.

This article was written by writer and director Roger Hill.