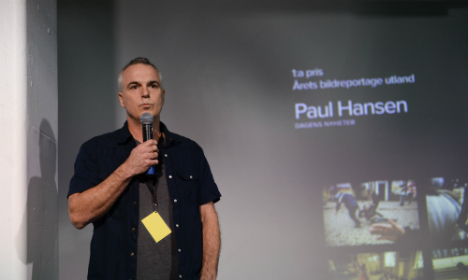 Hansen was being operated on in the Iraqi city of Erbil on Sunday. Photo: Nora Lorek/ TT

Hansen was struck by two bullets, one hitting his helmet and the other going through his safety vest and hitting his back, while documenting Iraqi- and Peshmerga forces advance on Mosul. Hansen was rushed to a hospital in Erbil where he was being operated on Sunday, but his injuries were not deemed to be serious.

Hansen and his colleague Erik Ohlsson were among a group of journalists travelling with Kurdish Peshmerga forces when the incident occurred, some 30 kilometres outside of Mosul.

“This is a serious incident, but both of them are in safety in Erbil and Paul Hansen is getting the medical treatment he needs. He will be operated on shortly since a bullet remains in his back,” DN’s Editor in Chief Peter Wolodarski said on the newspaper’s website.

“We’re in continuous contact with both Paul and Erik and they are doing well considering the circumstances,” Wolodarski said.

Hansen has won several awards for his work, both nationally and internationally, and has covered war and conflicts for years.