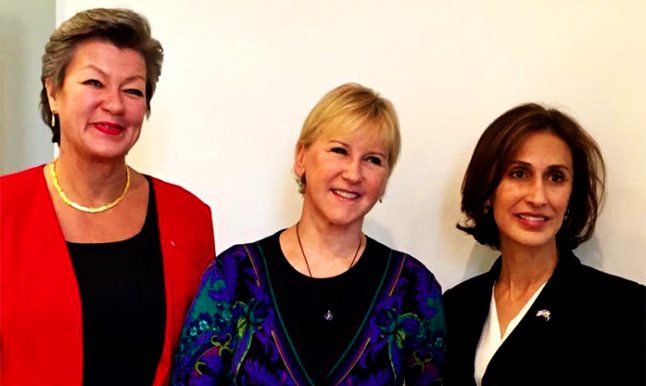 How can these women be empowered? What challenges might they face? These were just two of the questions tackled by the panel.

Participants in the round-table discussion at the Swedish Institute on October 20th 2016 included Swedish Foreign Minister Margot Wallström, Minister for Employment and Integration Ylva Johansson, Minister for Children, the Elderly and Gender Equality Åsa Regnér, and US ambassador to Sweden Azita Raji.

They were joined by women leaders from the business world and civil society organizations, such as Refugees Welcome, Incluso, Sodexo, Mitt Liv, and LinkedIn, all of which work in different ways to promote integration.

Wallström highlighted the importance of recognizing and highlighting women's participation in society, while US Ambassador Raji pointed out Sweden's global reputation for gender equality, and generosity in accepting high numbers of migrants.

Wallström emphasized the benefits that migration brings – both to individuals and to host countries. She added that women's contributions were often not fully recognized.

“The world would become a better place if women shared power,” she said.

However, she noted that the fight for equality was “eternal” and that migration flows were set to continue.

“This will remain a challenge and something that we have to deal with. Reforms in Sweden didn't just naturally appear,” she explained, referring to progressive reforms in the 1970s that helped promote gender equality in the country. “It took women organizing themselves and fighting for their rights to get reforms, and that has changed society.”

She also mentioned the need to combat violence against women, an “unfortunate constant, which we encounter everywhere around the world.”

Participants also discussed the need for women to be engaged in technical solutions to aid in their own entry into Swedish society, from housing during the asylum processing period, to networking and training tools to aid social integration.

“Why don’t we have equipment, I mean technical equipment, to reach young people?” Wallström asked. “There are some initiatives, but it’s not on a big scale. We have some amazing people that could be mobilized for looking into this.”

“How can we get the gadgets, and the programs, and the efforts for this? I really wish women could be more engaged in providing these solutions. Can we take some kind of initiatives to bring them together to think: we can help also with technical needs.”

Azita Shariati, the Nordic CEO of food service multinational Sodexo, then shared her story of arriving in Sweden as a “love immigrant” in 1988.

“I was a young immigrant woman then just like the women we're talking about today,” she said. “I feel a responsibility to help others.”

She added that diversity isn't simply a “legal issue” but is “key for our success”, emphasizing the importance of immigrant women to the process.

“We need to move from how we can help them to how they can help us and take Sweden to the next level,” said Shariati.

“It's important to combine diversity with inclusion. Without inclusion it doesn't work and we won't be able to harness the benefits of this diverse group.”

Employment minister Johansson, who has a coordinating role for integration in Sweden, spoke about segregation, stereotypes and resources, saying: “The refugee woman is a person with resources.  I think this is the most important thing, and we don’t always see these resources.”

“Stereotypes take resources away from the migrant women,” she added, echoing the importance of inclusion mentioned by Sodexo's Shariati.

“Diversity will only be a good force, or the right force, when it’s combined with inclusion, otherwise we may just end up with segregation.”

She also pointed out the need to address the problem of segregated areas of Sweden.

“It really, really is a problem,” said Johansson. “I met Somali women in Husby, who are organizing themselves and doing things together, but one of the women told me 'I grew up in Uppsala. When I was in Uppsala I was a lawyer, and when I moved to Husby I became a Somali woman'.

“That’s how people get removed from their resources. Of course, you have the right to your own identity, or how you would like to describe yourself, but in the labour market, you are a lawyer, and we have to be able to see these skills.”

Johansson did not shy away from the fact that discrimination and even racism exist in the Swedish labour market, but she added that many employers are adapting and starting to embrace foreign talents and employees. “I think something good is happening.”

'A lack of a system'

The next step, she believes, is bringing together the positive projects happening across the country.

“In international meetings, I often hear myself saying: 'in Sweden, we have a system'…but when it comes to helping newcomers in the labour market, there’s no system. There’s a lot of ad-hoc; there are a lot of individuals, a lot of projects, a lot of good examples. But actually, there’s a lack of a system.”

Journalist and columnist Alexandra Pascalidou, who arrived in Sweden from Greece as a young child, spoke of the “open sorrow” she has for the many immigrant women who “never found there way into Swedish society”.

She referenced her own mother who has lived in Sweden for 40 years but lived a very sheltered existence.

“Most of these women never have the opportunity to meet other Swedish people,” she explained.

“They are forgotten because they don't burn cars. They are the most oppressed; they are at the bottom of the hierarchy and should be included.”

Meanwhile, equality minister Regnér, who recently announced the government's plans to launch a national equality authority, expanded on the theme of feminism.

“Sweden has a feminist government, and feminism should include everyone without exception,” she noted.

Regnér added that discussing new reforms was crucial, and recalled the reforms introduced in the 1970s which were important for gender equality, including individual taxation which allowed more men and women to participate in the labour market.

Among the many experts gathered was Laras Pinji, an Indonesian journalist who arrived in Sweden in 2012 after her husband got a job here.

“I wanted to study and look for work, but it wasn’t as easy as I had thought. I sent hundreds and hundreds of job applications, and I sent my CV everywhere but got no interview invitations from any company. I was depressed, because I see myself as a capable woman with skills. Someone who wants to start over in her new country – why did that have to be so difficult?”

Pinji eventually got help from a mentoring programme called 'The Chance of my Life', (Mitt Livs chans), which matches university-educated foreigners with professional mentors. It's operated by Mitt Liv, a company focused on sustainable, profitable solutions to society's problems.

“My mentor was an engineer, and at first I wondered how he could help me. But he helped a lot; just changing a few things in my CV made a difference,” Pinji explained.

“There are also the unwritten rules, such as 'lagom' (a Swedish term meaning 'just enough', neither too much, nor too little). It was very nice to have someone to explain all that to me. He told me: 'Laras, it's going to be alright. You are driven, motivated and have skills – it's going to be OK.”

Pinji says the most important thing was that her mentor saw her as a person rather than an immigrant or a Muslim.

“Here I am a few months after the end of the programme – and now I'm working as a coordinator for it.”