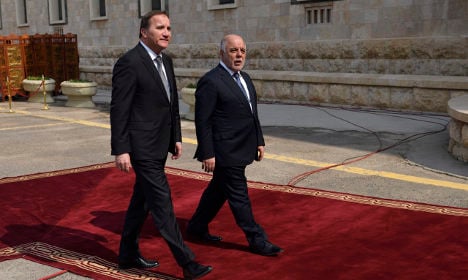 Stefan Löfven and Haider al-Abadi during the visit on Monday. Photo: Henrik Montgomery/TT

The focus of the meeting in Baghdad was the ongoing offensive to liberate the city of Mosul from Isis, and Löfven reiterated the Nordic country's plan to increase the number of Swedish troops on the ground from 35 to 70.

“We have discussed this, and Sweden will expand our efforts against Daesh because we consider it so important. Sweden plans on doubling the number of people from 35 to 70 and also to become more flexible geographically,” Löfven commented after the meeting.

Swedish soldiers are tasked with being military advisors to, as well as educating and training Kurdish Peshmerga forces in northern Iraq.

The offensive to free Mosul in northern Iraq from Isis forces has been ongoing for a week. Around 30,000 Iraqi soldiers are involved, with the support of a US-led coalition, as well as Kurdish Peshmerga forces.

Soldiers have yet to reach the city, which was taken by Isis two years ago and has a population of around 1.5 million citizens. Earlier on Monday, Löfven warned that the utmost must be done to protect civilians in the area.

“All parties must do their utmost to protect the large civilian population in the city. It is also important that Iraqi leaders work for national reconciliation and reform in the country. That is key for stable progress in the long-term,” he said in a statement.

Löfven was also due to meet Iraq’s president and head of state Fuad Masum during the visit, as well as several women's and peace organizations.

The Swedish PM landed in Iraq on Monday after leaving Saudi Arabia earlier that day. There, he had met representatives of the royal family in an effort to thaw relations with the country following a major diplomatic row in 2015.

Another reason for Löfven’s travels in the Middle East (which along with his spell in Saudi Arabia included a trip to Jordan last week) is Sweden’s forthcoming spell as a temporary member of the UN Security Council, which the Nordic nation will take up next year.