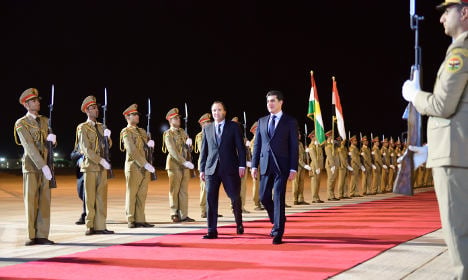 The Social Democrat leader is currently in Erbil, some 80 kilometres from Mosul in northern Iraq. He arrived late yesterday after visiting Saudi Arabia over the weekend and Baghdad on Monday.

“Sweden has strong ties to this part of Iraq. It is essential to discuss current developments and the offensive against Mosul with the Kurdish regional government and to meet Sweden's contribution to the fight against Daesh [Islamic State/Isis],” said Löfven in a statement.

The offensive to free Mosul in northern Iraq from Isis forces has been ongoing for a week. Around 30,000 Iraqi soldiers are involved, with the support of a US-led coalition, as well as Kurdish Peshmerga forces.

Soldiers are slowly approaching the city, which was taken by Isis two years ago and has a population of around 1.5 million citizens.

On Monday Löfven reiterated the Nordic country's plan to increase the number of Swedish troops on the ground from 35 to 70.

Swedish soldiers are tasked with being military advisors to, as well as educating and training, Kurdish Peshmerga forces in northern Iraq.

A Swedish photographer, Paul Hansen, who was shot by a sniper while covering the Mosul offensive, is back in Sweden. He landed at Stockholm's Arlanda Airport late on Monday.