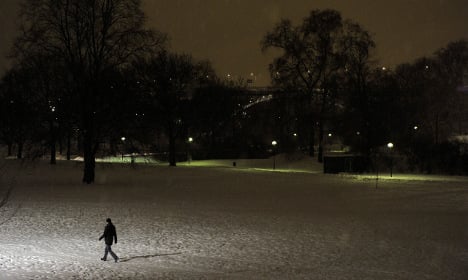 Soon it will look like this on your way home from work in Sweden. Photo: Anders Wiklund/TT

Sweden will turn back clocks an hour on October 30th, but every year calls are heard for the practice to be abolished as its citizens wrap up in winter coats and remember summer barbecues and what it was like to have more hours of daylight in the afternoon.

And Swedish MPs seem to be more tired than ever of the winter darkness. Five motions have been put to parliament this year to make summer time permanent – more than in all the years since 2000 together.

“It feels like an old way of thinking that it's to be light in the morning when we're outside milking the cows and the kind of things we were up to a hundred years ago; now there's a greater chance to take advantage of daylight hours in the afternoon instead,” Mathias Sundin, a member of parliament for the centre-right Liberals, told the TT newswire.

The only party that officially supports ditching daylight saving time, however, is the Green Party, the junior partner of the centre-left coalition government, so it is unclear how much support the proposals will get.

Technically, so-called 'winter time' is the standardized time and 'summer time' is the newer practice which advances clocks by an hour during the summer months. Sweden first introduced the concept in 1916, but it was scrapped shortly thereafter after farmers complained. The project was not tried again until 1980.

Almost all European countries use daylight saving time, apart from Iceland, Belarus, Georgia and Armenia. The EU today has a common start and end date – from the last Sunday of March to the last Sunday of October at 1am GMT. However, Sundin argues that Sweden would be able to go it alone.

“The parliament can say 'we want to do this' and try to get the EU on board, and otherwise we'll have to do it ourselves,” he said.

READ ALSO: How to love November in Sweden (no, seriously)