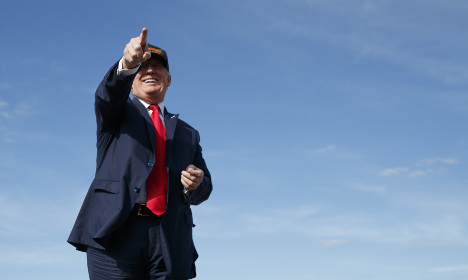 Ekholm, who previously studied and lived in the US, holds American citizenship and can vote in the November election. His family currently lives in Greenwich, Connecticut.

The Swedish-American says he plans on participating on November 8th, and while he isn’t particularly enthused about either of the main candidates, his vote won’t be going to Republican nominee Trump.

“I think it’s a democratic duty to vote. I have requested a ballot paper and I will vote. It’s a choice between two weak candidates, but I can’t bring myself to vote for Trump, and you can draw your own conclusions from that,” Ekholm told Swedish news agency TT.

READ ALSO: This is the new top boss of Swedish Ericsson

The Ericsson boss isn’t the first Swedish-American to take a shot at the New York businessman. Hollywood actor Joel Kinnaman, who has an American father and holds dual passports, claimed that he will move back to Sweden if Trump becomes president.

He later took a further swipe at Trump by accusing him of “spreading conspiracy theories” and being “openly racist”.

Are you an American in Sweden who intend on voting for Donald Trump? We want to hear from you, please get in touch.