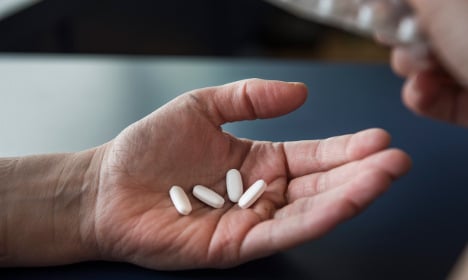 Paracetamol tablets, such as Alvedon and Panodil, were taken off supermarket shelves a year ago, following a spike in cases of accidental poisoning and overdoses. However, they are still available in the roughly 1,500 specialized chemists across Sweden.

On Wednesday the Swedish Pharmacy Association – representing almost 100 percent of the pharmacy market in Sweden – said that its members had agreed to take the rules one step further, by preventing the sale of more than one pack at a time to under-18s.

While under-18s are already prevented from buying painkillers from supermarkets, there is currently no regulated age limit for buying over-the-counter medication at pharmacies in Sweden.

“The pharmacy industry now takes another step for a responsible sale of its products by choosing themselves to restrict the sale of paracetamol to younger people,” said Johan Wallér, CEO of the Swedish Pharmacy Association, in a statement.

Adults who wish to purchase more than one pack of paracetamol at a time will receive advice on how to take the tablets, said the press release.

“In pharmacies there are trained professionals who can advice and act on suspicion of incorrect drug use, also for the range of non-prescription products. Because not all customers actively seek advice, the pharmacy industry has also agreed to increasingly ensure correct use of paracetamol for adults,” said Wallér.

Just as in the case of the ban on paracetamol in supermarkets, the agreement applies only to pills intended to be swallowed whole, not to soluble painkillers and effervescent tablets.