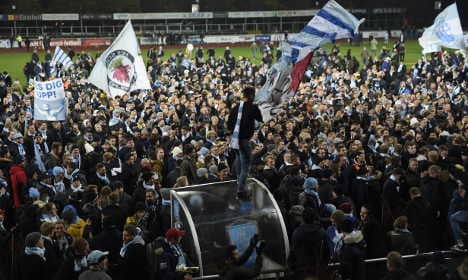 “That's why we win the gold. To qualify for the Champions League. We should not be satisfied just with winning the Swedish championships. There's a reason you win the Swedish gold and that's to go to Europe,” said Malmö defender Behrang Safari after the game.

Malmö reached the Champions League in both 2014 and 2015 – an impressive effort by a Swedish club – but crashed out at the group stage. They are now hoping for a third chance.

“We have created better conditions for ourselves than ever,” its CEO Niclas Carlnén told the Aftonbladet tabloid. “But the chances are slim, which we saw the times we made it.”

Fans ran on to the pitch to celebrate with the players after it was clear Malmö had won the Swedish top-tier league Allsvenskan on Wednesday evening. At the start of the evening, masked supporters lit flares, but police said that the rest of the evening had been peaceful. Malmö beat Falkenberg 3-0 while IFK Norrköping lost to IF Elfsborg 2-1 – which meant that the southern Swedish city was able to claim the cup despite still having two remaining games of the season.

Norwegian Jo Inge Berget scored the first goal of the match in the first minute, after an assist from 17-year-old Mattias Svanberg who made it 2-0 just 18 minutes later.

Alexander Jeremejeff sealed the win for Malmö in the second half, bringing the total to 3-0.