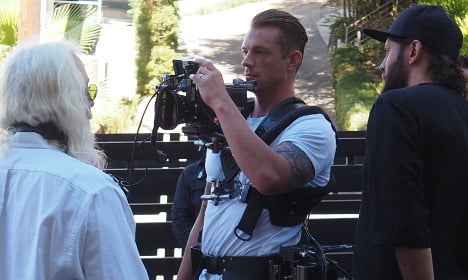 Kinnaman with one of the camera rigs that will allow people inside his head. Photo: Tele2

On Saturday evening, Kinnaman will strap a rig including a GoPro portable camera to his head and stream the feed out live as he prepares for a new role in Vancouver. Along with seeing and hearing everything the star experiences, viewers will also get to monitor his heartbeat, adrenaline flow, sweat levels and even his emotional state.

To make things more interesting, the audience can also test Kinnaman's patience and interact with him by clicking a special button on the screen which he will then hear. The experiment is part of a promotional campaign from Swedish telecommunications company Tele2, who call it a chance to “step into Kinnaman’s head” and sample what it is like to be a Hollywood star for a day.

The point of the campaign is to show off what Tele2 call “Emotional Reality” technology, an extension of Virtual Reality where other details like heart rate and sweat also come into play.

Along with Kinnaman, the technology will be tested on other high-profile Swedish figures in the run up to December, including Simone Giertz – the Swedish Youtuber who gained fame for viral videos of her “crappy robots” – and Swedish American businesswoman Cristina Stenbeck.