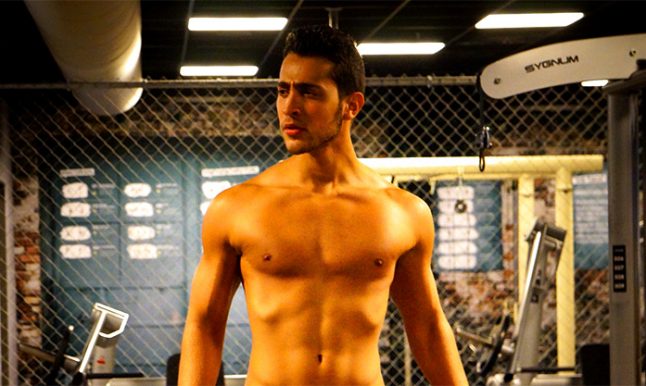 Antonio hopes to use pornography to change the perception of Syrians and refugees.

He hopes to show the ‘Syrian body’ as a body which makes love, rather than merely being seen bloodied, under rubble, or torn into shreds.

But after fleeing war and fleeing to Germany, the actor describes how he at last decided to use his body to express himself through pornography, after he was excluded from other means of expression.

The Local Voices talked to Suleiman about his life since unwillingly applying for refuge in Germany. We asked why he decided to work as a pornographic actor, what drove him to choose this job at such a young age, and if he’s convinced by his work.

Why did you choose Germany and what have you done since arriving?

I was still underage when I arrived in Germany. I didn’t want to settle down there; I hoped to move to either the UK, or the US, because they are famous for their performing arts, and I thought the chances there to get into the filmmaking industry would be much higher than in Germany.

But Stuttgart’s airport customs caught me while I was boarding to fly to the UK in 2012 – I was planning to go to the US afterwards – and I was forced to have my fingerprints taken.

After that, I re-considered my situation. I spent the first year learning German, and learning about Germany – but still wanting to move to the US. When, how, and why did you decide to work as a pornographic actor?

In Syria I always wanted to become a (non-pornographic) actor. Performing on stage or in movies has always been my dream.

I kept following this dream in Germany, but I soon discovered that it wasn’t easy at all. I contacted institutions, companies, producers, actors and directors about getting training, or getting into the industry in any possible way.

Once they found out I was Syrian, their replies were immediately either “bye” or “We may contact you later” (which meant the same thing).

All the doors were shut because of my nationality.

There’s a kind of discrimination against refugees within the German community. Many Syrians in Germany claim that there’s no racism, and that everything is good. I think they are lying to themselves.

After giving up on the performing arts in Germany, I started looking for any possible job. I searched in all different industries, but they all asked for degrees and specialisms that are far from my reach.

I tried to work as a dishwasher in restaurants, but even with a job that doesn’t require skills or a degree, I couldn’t find anything.

The solution turned out to be contacting a UK producer under a German name. I knew that in Germany, they’d discover I was faking my identity, but in the UK, they wouldn’t.

A month after the casting in Amsterdam I was sent to Belgium where I acted in two movies and got €500 for each, but I was never contacted for shooting again. After three months, I found that everyone I had worked with was doing new movies, but I had been sidelined.

Now I only work for American producers because they are open for accepting others – Germans are not.

I can’t say that I’m really happy doing this work, but still, it’s better than my life in Germany was before.

Secondly, I wanted to post it not to use the label ‘refugee’ for publicity, but rather to send a provocative message to German racists.

To those who refused to accept me and define me as ‘Syrian’, and always defined me simply as a ‘refugee’. This has made me very sad in Germany – whenever I meet someone and tell them I am Syrian, they reply: “Ah yes, a Syrian refugee.”

Are you proud of your movie The Arabian King?

They were angry and said that I brought shame to the whole family.

However, my friends stood by me and supported me.

Some Syrians have criticized you, saying your film was an extra violation to the ‘Syrian body’, which has already been widely degraded. What’s your comment on that?

That’s not true. I didn’t mean to ridicule anyone. I used my body, which is mine to use as I like. After launching The Arabian King I read some comments on social media, but then I stopped.

Our community can be very negative; they always bombard you with criticism whatever you do.

For over five years now, Syrians have mainly been pictured under rubble, massacred, their dead bodies in the Mediterranean, or humiliated throughout their perilous journey to Europe. Surely that’s what degrades and violates the ‘Syrian body’.

Yes, I used my body. I used it to show that this body can make love, can have sex, and does not only exist in order to die.

What are your plans for the future?

The fact that I’m now working as a pornographic actor doesn’t mean I’ll stop working towards this. I want to perform in scenes where I convey meaning, and not merely act to sexually excite viewers.