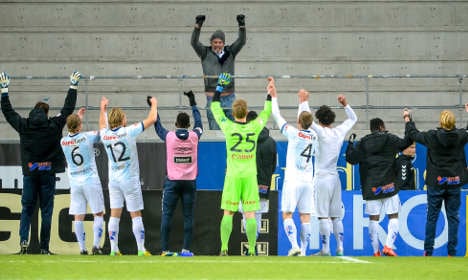 Possibly the most dedicated fan in the world. Photo: Patric Söderström/TT

Gefle IF are having a dismal season and hadn't won a game since August until Wednesday, so unsurprisingly most of their supporters didn’t seem particularly keen to make a 12 hour midweek trip to watch them face Kalmar.

Except one person, that is. During the match, TV cameras panned to the stands and spotted Peter, a lone Gefle diehard in the away section, who was cheering on his team enthusiastically. Standing up, no less.

“I’ve been a GIF fan since I was a kid and it felt right to just do it,” he explained to The Local.

Peter had the last laugh and was rewarded with what was only the side’s fourth victory of the season as they came away 1-0 winners, giving them a chance to avoid relegation with two matches and a possible play-off left to play.

Gefle IF players celebrate an away win with the only fan who made the 700-mile round trip in Sweden! Love it pic.twitter.com/NNv5w9vmrF

Pictures and videos of the Gefle team celebrating with Peter after the final whistle have gone viral, being picked up by newspapers in the U.K, Spain and beyond.

“I feel like there has been enough attention,” he shrugged, adding “I've been to Gothenburg and Malmö which are longer trips, but none were as crucial as this one”.

“It is nice that they appreciate a true fan,” he did admit.

And the Gefle players will have good reason to get back in touch if they do manage to pull off the miracle, Peter said.

“I’ve promised the players I’ll buy them all a beer if they stay up,” he revealed.

“We have a chance if we make a heroic effort and everything goes well. Everything has to go right, but we have done it before and we’ll never give up!”

There's no denying his dedication.