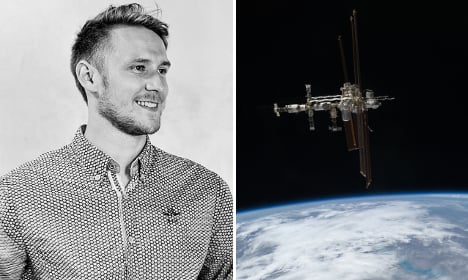 Anders Åberg has built a website that allows you to hear what’s going on above the Earth. Photo: Personal & NASA

Anders Åberg’s “Listen to the clouds” website lets users listen to airports the world over, from New York to Tokyo, Sydney or Stockholm. You can even spy on the International Space Station as it rotates the earth – all to the backdrop of mesmerizing ambient music.

“I love building stuff, and I wanted to show that you can create cool stuff by connecting the dots from other stuff,” Åberg told The Local. The Swede’s site works by pulling together several tools that were available elsewhere but not previously collated, collecting open feeds from air traffic control centres across the globe.

“The internet is Lego: One piece is useful, but put a bunch of them together and you can create awesome things,” he said.

“I love to connect the physical and digital world. It becomes a lot more tangible and yet magical when something that happens in real life is reflected digitally and vice versa. I had no idea listening to air traffic control towers would be this mesmerizing.”

And it’s easy to lose track of time while following what’s going on above a random city in a distant country.

“I have found myself sitting for hours just listening,” Åberg admitted. “One time I heard an airplane calling for a paramedic for a sick passenger. Another time I heard them discussing how they could make sure a passenger reached a connecting flight!”

Grumpy travellers may even find the tool helps them to gain a better appreciation of the work taking place behind the scenes the next time they fly.

“It gives you a lot more insight into what happens in the service towers you see when you’re a passenger. And for me personally, a lot more respect for the staff.”