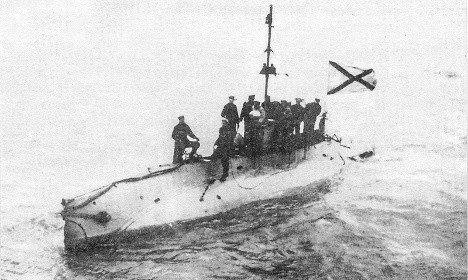 A Som class submarine similar to the one found in Swedish waters. Photo: Wikimedia Commons

Russian submarines are a sensitive subject in Sweden after the Swedes' infamous hunt for an underwater vessel that was never found in Stockholm's archipelago in 2014, as well as the Russian submarine that mysteriously ran aground in Swedish waters in 1981.

But Russia now hopes to thaw relations between the two countries by suggesting they should join forces to salvage one of its submarines which sank in the Åland sea a century ago.

The wrecked submarine, a 'Som' class vessel built for the Imperial Russian Navy, was found last year by a group of salvage hunters.

“It sank after it collided with a Swedish vessel in 1916,” Jesper Tengroth, a spokesman for the Swedish Armed Forces, told The Local at the time.

A group of Russian and Swedish experts were sent out in September to examine the wreck. They believe there may be explosives in the submarine, which risk detonating if the vessel is salvaged.

But the Russian Embassy in Stockholm wants to give it a go.

The Svenska Dagbladet newspaper (SvD) reported on Monday that the Russian ambassador, Victor Tatarintsev, wrote a letter to the Swedish Maritime Administration (Sjöfartsverket) in May saying that joint work to salvage the wreck could “sanitize the general atmosphere in the Russian-Swedish relations”.

“Sweden should of course be in charge of the judicial decision, because the submarine is in Swedish territorial waters, while Russia should be responsible for financial and practical matters. In any case we are very grateful to Swedish partners for a constructive approach and positive cooperation so far,” embassy counsellor Roman Mironov wrote in an email to SvD.

The Swedish Justice Ministry has not yet confirmed plans to salvage the wreck, saying that it first wants to assess the risks involved in such an operation.