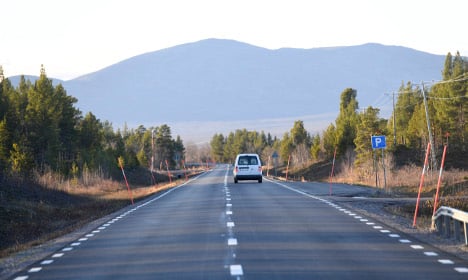 The maximum limit on the roads will drop from 90 kilometres an hour to 80 kilometres an hour, as an alternative to widening them and converting them into what are referred to in Sweden as meeting-free roads, multiple lane roads with a crash barrier.

“The eventual goal is for all roads with a higher speed limit than 80 to be meeting-free roads,” Trafikverket investigator Mikael Klingstedt told news agency TT.

Roads will start to be changed during November and December as the first steps in a shift that will alter around 600km of roads in the country.

By the year 2025 the plan is for a further 4000km of roads which previously had a 90 speed limit to be reviewed as part of Trafikverket’s work to cut the number of serious and fatal accidents on Sweden’s roads.

In 2015 there were 260 fatalities in road accidents in Sweden according to the country's transport agency (Transportstyrelsen). In the same year there were 1,732 in the UK, and 38,300 in the US.

But not everyone is convinced that changing the speed limit is the way to bring Sweden's number of road fatalities down however.

“Fewer fatal accidents is a goal that it is difficult to argue against. But the solution isn’t always to reduce the speed limit,” argued Mikael Högskoog, press officer for motor vehicle-owner organization Motormännen.

“Rather, we think that resources should be used to make roads safer through for example changing them to 2+1 (alternating three lane) roads.”

Trafikverket insists that the change is the best way to reach their targets. The roads which will be changed are largely those with a particularly high traffic flow.

“Nobody would be happier than us if there was a chance to build more meeting-free 90 roads. But in order to live up to the ambitious goal set out in our traffic safety work, we need to sink the speed limit on certain stretches,” Trafikverket’s Klingstedt argued.

According to Trafikverket’s estimates, reducing the speed limit could have a strong impact on accident statistics. Their calculations show that the number of deaths in traffic could reduce by seven people per year up to the year 2025, while 30 fewer road users would suffer serious injuries.