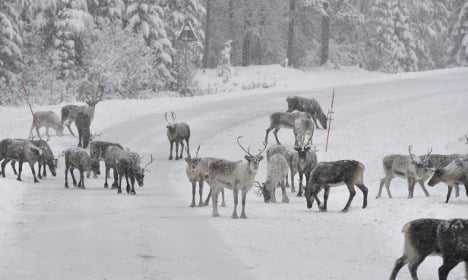 A class-two warning was in place for the Dalarna region and a class-one warning (the least serious on a scale from one to three) for most of central Sweden, said weather agency SMHI.

The worst of the snowfall was expected to hit the region around lunchtime, with 10-20 centimetres of snow forecast for Dalarna, and pictures showed plenty of snow on the ground in the area. Reindeer on a snow-covered road in Dalarna on Tuesday. Photo: Nisse Schmidt/TT A snowplough working to clear a road in Dalarna. Photo: Nisse Schmidt/TT

In Mora and Orsa in Dalarna, residents were urged to leave their cars at home if possible, and the emergency services said that they were preparing for incidents, focusing on three areas:

“First, there's communications problems, and in that area we're mainly preparing to help home care services and ambulances. Then there's power supply, what important buildings to prioritize if there's a power failure. Finally, it's what happens if phone lines die – how we can establish a secure connection and how me make sure people can raise the alarm if they need help,” Johan Szymanski, head of fire and rescue in Mora and Orsa, told TT.

The class-one weather warning applied to Värmland, Örebro, Västmanland, Gävleborg (apart from the coastal area, Västernorrland and Jämtland (about from the mountains). A class-one warning for harsh winds was also in place for the Baltic Sea and Öresund.

Do you have pictures of the snowfall? Send your best weather shots to [email protected].