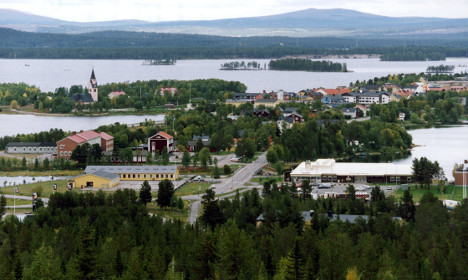 The Sami people are indigenous to Sweden and have lived in Scandinavia since the last Ice Age over 10,000 years ago, but while many towns in the country already use and display their Sami names, street signs are a different question.

In Arjeplog (Árjepluovve in Sami) Swedish Liberal party member Lars-Nila Lasko has been campaigning for that to change, and the municipal council (kommunfullmäktige) has now agreed.

“I got the decision from the kommunfullmäktige – which is the highest decision making body at municipal level – that there should be street signs in Sami, with the agreement that it will be financed externally,” Lasko told The Local.

“It’s thought some of the funding can come through EU projects and some can come from the Sami Parliament of Sweden’s culture committee. It'll take some time for all the applications to process. I estimate it will be between two to three years before it's done.”

In contrast to Sweden, there are already Sami street signs in some parts of Norway and Finland. Lasko explained that recognizing the minority language is still a relatively new thing for the Swedes.

“Sweden has long seen itself as a mono-cultural country with a unified language, a unified culture and such. A good example of this is Sameradion. Long before that launched there was radio programming in foreign languages on Sveriges Radio,” he noted.

“That’s not so long ago. The idea that there’s Sami culture and Sami language and making an effort on it is quite new for some parts of Sweden. Sweden’s a big country, and the Sami territory is far away from Stockholm,” Lasko observed.

READ ALSO: 'Stop treating Norrland like a monkey in a zoo'