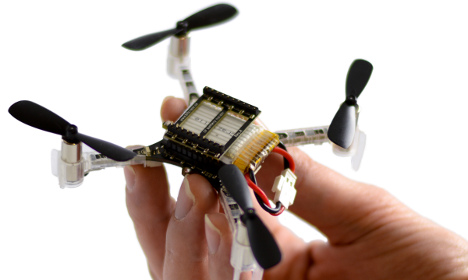 A picture of one of the tiny Swedish drones Nasa is looking at. Photo: Bitcraze

Malmö-based startup Bitcraze has come up with a way to pre-program their tiny 27 gram drones to work autonomously, enabling them to fly in science fiction-like coordinated swarms of up to 49 units at a time.

Their ‘Crazyflie’ tech has now caught the eyes of Nasa, as well as Microsoft and Ericsson. But getting the miniscule flying machines up to scratch has been a long process, one of their founders told The Local.

“We’ve been working on them since 2009 and have evolved them in iterations. In the beginning it was fairly simple, but the system has progressed into a more mature and autonomous drone over time,” Bitcraze co-founder Tobias Antonsson said.

While Antonsson didn’t want to go into too much detail about what Nasa are testing the drones for, he did say that their ability to fly in swarms was an attractive prospect for the space agency.

“All I can say is that they are looking at swarm technology. How to solve a task faster with a swarm as opposed to a single drone. As the Crazyflie platform is small, light and safe, it’s a great tool to study these kind of things,” he explained.

The developer speculated that possible practical uses for the autonomous drone swarms could be everything from light shows, to search and rescue missions and educational projects.

Drones are a hot topic in Sweden at the moment after the country's top-tier court decided to classify any of the flying machines featuring a camera as surveillance devices. That means flying camera-equipped drones without a difficult to obtain surveillance permit is not allowed.

And while Bitcraze’s mini-drones will not be impacted by the change as they do not have cameras, their founder said the move could have a damaging impact on the industry growing around the devices in Sweden.

“We were all surprised. In the rest of the world drone restrictions are getting lighter, but here in Sweden we did the opposite,” Antonsson noted.

“Let’s hope the politicians find a quick and good way forward because it’s going to hold back the drone industry that depends on this new technology.”