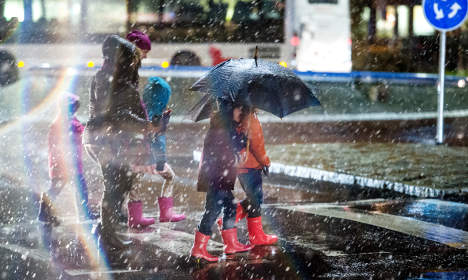 Some 20 centimetres of snow fell in Idre in Dalarna on Tuesday, with heavy snow also hitting other mountain areas in the central Swedish region, as well as Härjedalen.

“It is really positive. Above all because it makes people wake up and see that winter is coming. If there's enough snow we can start preparing tracks and pistes,” the head of the Stöten ski centre in Dalarna, Johan Thorn, told the TT news agency.

“We'll open some hills for groups as soon as we can. It depends on when it gets cold. What's positive now is that the prognosis says it's going to be minus 15C in the foreseeable future,” he added. Icy roads caused a bus to turn over on a road north of Huskvarna in morning rush-hour traffic. Twenty people were on board the bus: eight have been taken to hospital while a further 11 received assistance at nearby clinics.

Several of the passengers complained about back and neck pain, but emergency services did not want to go into detail about the extent of any possible injuries.

“I can’t say anything about the injury situation. But those who needed care have received help,” Jerker Sturedahl of Jönköping fire and rescue service told Swedish news agency TT.

And in the Swedish capital, not everyone was pleased about the early snow.

“November 2nd and the first snow. Oh my god,” tweeted the British Ambassador to Sweden.

He was not the only one…

Stockholm. It's only Nov 2. Long months ahead. pic.twitter.com/wtRRNcmO4m

Be strong my friend https://t.co/rmUPmDIo89

Just looked out the other window and saw this. Way more snow than I expected today and am totally unprepared for. #stockholm #firstsnow #sweden

I'm told this is what Stockholm looks like today. Not sure I want to leave Skåne… pic.twitter.com/QGce35a53X

READ ALSO: How to survive November in Sweden