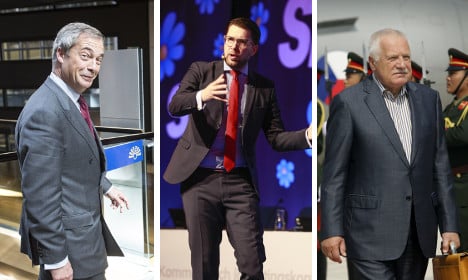 Nigel farage (left) and Václav Klaus (right) are due to attend the event organized by the Sweden Democrats. Photo: Jean-Francois Badias/AP & Per Groth/TT & Sakchai Lalit/AP

But just who are the people SD invited to take part? Let's take a closer look.

The person who has been awarded SD’s first “European Freedom” prize. Former Czech President Klaus spent 23 years at the top of Czech politics, and is the co-founder of the Eurosceptic Civic Democratic Party.

Klaus famously held up the ratification of the Lisbon Treaty by demanding an opt-out for his country, before eventually signing it in 2009. An outspoken climate change denier, he is one of the few heads of state to openly challenge the assertion of the Intergovernmental Panel on Climate Change (IPCC) that global warming is man-made. He was also once accused of stealing a pen on a state visit to Chile.

“From his fight against the communist regime in the former Czechoslovakia to his opposition to the EU’s supranationalism there is a clear thread which defends self-determination and democracy for Europe’s people,” SD press head Henrik Vinge told Nyheteridag about the prize winner. The face of Brexit, MEP Farage has been interim leader of Ukip since October after stepping down in September, and was leader of the Eurosceptic party on two previous occasions. He recently spent time in the US as part of Donald Trump’s presidential campaign. Famous for his love of beer.

Farage’s Ukip is a member of pan-European party Alliance for Direct Democracy in Europe (ADDE) alongside SD, despite previously describing the prospects of working with the Swedish nationalists as “highly unlikely”. He is due to give a speech at the event on Friday. A former President of Lithuania, Paksas was impeached in 2004 as Lithuania's parliament judged that he had violated his oath as well as the Lithuanian constitution through dealing with a Russian businessman who was suspected of links to Russian organized crime. He is the first president in the history of the Baltics to be removed from office by impeachment.

The Constitutional Court of Lithuania subsequently ruled that people who violate the country’s constitution or fail to uphold their oaths of office should never again be allowed to hold public offices that require an oath, but in 2011 the European Court of Human Rights deemed that to be disproportionate and in violation of the European Convention of Human Rights. Paskas is now an MEP for the Eurosceptic Order and Justice party, who are also members of ADDE alongside SD. The Ukip and former Conservative MEP has a reputation for expressing controversial views on homosexuality, which included distributing a pamphlet during a by-election campaign in 2000 saying homosexuality is “abnormal” and “undesirable”, and tweeting in 2011 “Why is it OK for a surgeon to perform a sex-change operation, but not OK for a psychiatrist to try to ‘turn’ a consenting homosexual?”.

In October meanwhile he shared a tweet depicting refugees as terrorists or sex offenders with the caption “Allahu Akbar”, before later explaining “I thought it was an amusing and relevant comment on the immigration debate and migrant issue”.

The co-founder of the Belgian People’s Party, Modrikamen is the publisher of right wing Belgian newspaper Le Peuple. He has been described as Belgium’s Donald Trump, and has endorsed the businessman for the US presidency.

The Gaullist head of French sovereigntist movement “France Arise” is staunchly anti-EU and wants to see France take inspiration from Britain and leave the union, and he also advocates France leaving the Euro.

Outspoken French MP Dupont-Aignan is a 2017 presidential candidate, but will to struggle to make an impact with Marine Le Pen’s Front National likely to mop up much of his core vote. The Ukip MEP is a former Conservative councillor, but resigned from the party in 2011 after controversy over him posing with golliwog dolls in a Facebook post. Etheridge later wrote a book celebrating the dolls entitled “Britain: A Post-Political Correctness Society”.

He was one of the eight candidates for the Ukip leadership when Diane James quit in October after just 18 days in the job, but later pulled out of the race.

Fish and chips by the sea . Life is good pic.twitter.com/hhW7tBwAfY

The Dutch former journalist is now the leader of the VNL party group in the Netherlands’ House of Representatives, who are also a member of the ADDE.

A Eurosceptic, Roos wants to see an Australia-style system of immigration implemented in his home nation.

The Ukip MEP who employed Kirsten Farage after an EU rule banning MEPs from employing family members meant her husband could no longer keep her on his payroll. Finch was once caught by TV cameras making a rude gesture during a debate in Strasbourg.