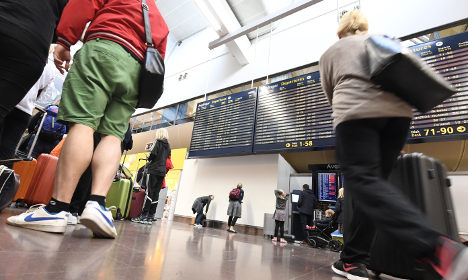 The agreement should make the journey from Stockholm to the US smoother. Photo: Mikael Fritzon/TT

The Swedish government said it hopes the increased ease of travel will have positive consequences like for example making Sweden a more attractive place for international companies to base their headquarters in.

The agreement was signed by Swedish interior minister Anders Ygeman and US Ambassador to Sweden Azita Raji in an official ceremony at the Stockholm US Embassy on Friday morning.

Last year, Jeff Anderson who was Public Diplomacy Counselor at the US Embassy in Stockholm at the time, explained to The Local how the preclearance process will work:

“What this means is that all customs procedures would happen here in Sweden, so you would enter the US as a domestic passenger.”

“So flights could potentially land at different airports than they do now, and passengers could proceed directly to connecting flights or exit the airport immediately after collecting baggage,” Anderson added. Sweden is only the second country in Europe to use the system, following on from Ireland.

The agreement means armed American personnel will be responsible for borders, customs and security checks at Arlanda for travellers flying directly to the US, instead of the same process being carried out upon arrival.

The new system is expected to be in place by the end of 2019, according to Kjell-Åke Westin, airport director of Arlanda.