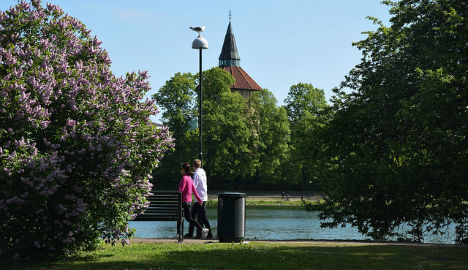 A 14-year-old was raped in broad daylight in Malmö's Pildammspark. Photo: Maria Eklind/Flickr
“We are taking this extremely seriously,” Bo Lundquist, the criminal commissioner who has established the investigation, told the local Kvällsposten newspaper.
The most recent case came on 21 October, when a 12-year-old was attacked in the city’s central Pildammspark. Police said she had been “a victim of a crime of a sexual character which is being treated as rape”.
On July 22, a 14-year-old was raped in broad daylight by a man who approached her on a bicycle and then pulled her into some bushes near a sports ground in the Husie suburb.
The Aftonbladet newspaper, which broke the story, said that as well as these two widely reported cases, police are looking into several other similar cases.
“They [the rapes] have been rough and ruthless, and occurred outdoors in the daytime. We do not really know what we are dealing with at the moment, just that it is not good,” a source told the newspaper.
Stina Karlgrund, the head of the Malmö police’s family crimes unit, confirmed that a prosecutor had been appointed to investigate the crimes.
“I can say that matters such as this have come to our notice. Children have been affected and we have launched a case into this. There is now a prosecutor leading the investigation,” she told Aftonbladet.
According to Kvällsposten, 15 police officers have been appointed to the team.  Police have yet to decide if the attacks are linked, or whether there are separate assailants using similar methods.
Lundquist told Kvällsposten that analysis of DNA collected from the 12-year-old and 14-year-old showed that the attacks were not carried out by the same person.
“There are two different perpetrators in those two specific cases,” he said.
Url copied to clipboard!