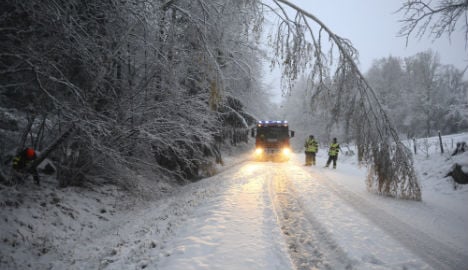 Rescue services clear the snow near Kinda in Östergötland. Photo: Per Svensson Borrud/TT
“It’s dangerous out there on the road,” Staffan Waldau, from the rescue services in Kinda, south of Stockholm, told Expressen. “It’s taking time to clear the snow. It will be a real mess”.
Weather forecaster SMHI has issued a Class Two snow warning for the counties of Östergötland, Kalmar and Jönköping, with between 25cm and 30cm of snow expected over the next 12 hours.
Sandra Andersson, a meteorologist at SMHI, told Sweden's SVT broadcaster that the snowy weather would continue into the coming week.
“The wintery weather is going to continue with temperatures below freezing during the day over large part of the country,” she said. “There will be no weather warnings, but a lot of snow.”
The biggest traffic delays came on Sunday morning after a snowplough caught fire on the E18 road outside Stockholm.
“It caught fire, we put out the blaze and no one was injured,” Linda Ulfves from the greater Stockholm rescue services, told Aftonbladet. The road was open again within an hour and a half.
In the worst affected regions, cars have slid off the road and into ditches, but so far no one has been injured.
The most serious accident saw a car slide off the E6 motorway in Stenungsund, north of Gothenburg. “No one was hurt, just a little shocked,” said Lars Tunefjord, from the local police.
Waldau said that the rescue services had already cleared away more than 30 trees which had fallen across roads in the Östergotland region, and said that there was a risk that more trees would fall on Sunday.
Although the Swedish capital, Stockholm, was less badly hit, rescue services warned that the mixed snow and rain would make roads slippery.
“It’s snowy this morning around Stockholm, which means a lot of traffic accidents,” Stockholm’s traffic police said on Twitter. “Take it easy in traffic, drop your speed, and keep a proper distance.”
“I see on my camera that we’ve got sleet, so it’s likely to be extremely slippery,” said the Stockholm police’s Ludvig Freund. You can obviously expect it to be slippery, especially this morning.”
The Swedish Transport Administration (Trafikverket) cancelled trains travelling between Linköping and Kalmar and between Linköping and Västervik because of the risk of falling trees.
“The risk is that they’ll get stuck out on the track without being able to get to a station. When there’s heavy snow and a strong wind blowing, it can be tough to get people out of the train,” Katarina Wolffram, the agency’s press officer, told Sweden’s TT newswire.