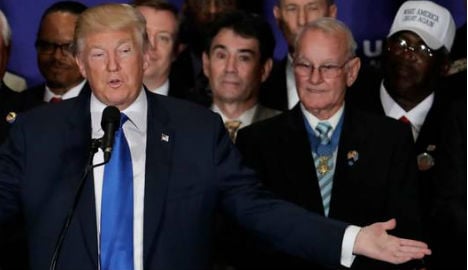 Jason Diakité's uncle Obi is standing to the far right of the picture. Photo: AP/TT
The rapper, who has ambitions to enter politics with one of Sweden’s three four left-wing parties, spotted his uncle Obi standing behind Trump wearing a baseball cap with the slogan “Make America great again” during a Washington press conference broadcast on CNN.
”As soon as Trump delivered his punchline, my uncle and the little huddle of men and women around him started to applaud,” the rapper, whose real name is Jason Diakité, wrote in an article in Sweden’s Dagens Nyheter newspaper. “God Damn! Uncle Obi! Behind Trump!”
Diakité’s father, the US-born documentary filmmaker and human rights lawyer Madubuko Diakité, settled in Lund, Sweden in 1968,  after marring a Swedish woman. But his uncle stayed in the US, managing to put his two children through college by working as a bus driver in Baltimore.
In his article, Diakité said he had challenged his uncle when he rung up for a family call.
”Yes, that’s completely right,” Diakité quoted his uncle saying in the article. “I’m ideally working sixteen hours a day for the campaign now.”
His uncle explained that he had been drawn to Trump because of his pledge to support US veterans, many of which are homeless in his area.
”I did not want to row with my uncle over politics, especially not over the telephone, because we hardly ever talk,” Diakité continued in the article.
“I listened to him talk, I listened, but I still couldn’t comprehend how an older black man, who like his wife worked as a bus driver for most of his life, and managed to get four children through college, could vote Trump.”
Diakité, 41, broke through in Sweden in the 1990s, and was one of it’s most successful artists throughout the 2000s.
He has recently released a book, “En droppe midnatt” or “a drop of midnight” which interweaves his own family history with the history of black people in America and in Sweden.
Below is a picture of Diakité performing at this summer's Bråvalla festival in Sweden.