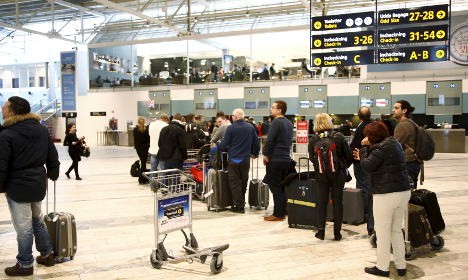 The plane took off from Gothenburg's Landvetter airport at 6.05am on Monday, heading for Bromma airport in Stockholm. But just minutes after takeoff the captain asked to urgently return to the airport.

“It was shortly after takeoff that the pilot declared an emergency and landed on the opposite lane. There was some kind of vibrations. But before landing the pilot said everything was working as normal,” Birgitta Eckermark of the Aeronautical Rescue Coordination Centre told Expressen.

“It happened pretty quickly. It took three, four minutes from him turning around to them landing,” she added.

Fire and rescue services and ambulances were called to the runway to assist the airport's own emergency crew, but were told to stand down before they reached the airport.

“The plane shook in a way that differed from the norm. The captain then chose to slow down and the vibrations stopped. The decision was then taken to go back and land in Gothenburg. The captain declared an emergency to the tower, which you do when something abnormal is detected, but in a dialogue with the tower they decided to do a controlled, normal landing,” Emma Sandsjö, spokesperson for the domestic airline BRA told Expressen.

After landing, the captain gathered passengers to explain to them what had happened.

“It is important for us to follow up the debriefing and we would like to be in contact with any passengers who experienced discomfort. We will offer support to those who need it,” Sandsjö added.

Flights from Bromma to Gothenburg were delayed on Monday morning as a result of the incident.