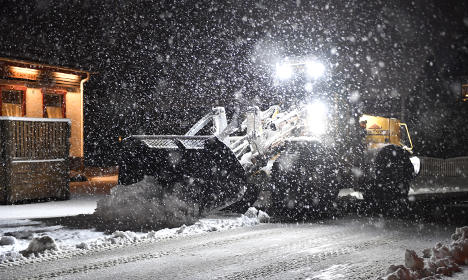 More snow is on its way to Sweden. Photo: Nisse Schmidt/TT

Admittedly, in English the kind of weather the Swedish forecasters have predicted is actually called lake-effect snow (a rapid deposit of snow caused when a cold air mass moves across an expanse of warmer lake water), but the literal translation of the Swedish term ‘snökanon’ sounds far more appropriate. An example of lake-effect snow (or 'snow cannons' as the Swedes say) hitting New York in 2014. Photo: Carolyn Thompson/AP

In any case, heavy and frequent snow showers are predicted to move in over the country’s east coast from Monday onwards, and a number of weather warnings (the most serious of which is a class-two over Gotland) have been put in place.

A class-one warning has also been issued further inland for the area around Sweden’s largest lake Vänern, which is located near the country’s west coast.

“The snow flurries are building up and can become really heavy. There is a risk of snow cannons, which will cause heavy downpour,” Frost added.

Winter weather will continue in the rest of the country meanwhile, and temperatures are expected to stay in the minus numbers for the coming days, with the only exception being southernmost region Skåne which could reach just above zero.

The continued cold is presumably music to the ears of the below Swedes, who saw a frozen lake at the weekend and decided there was only one thing to do (warning: we don't recommend this, even if it does look fun).

For us mere mortals respite could come at the end of the week, as forecasters say that low pressure may move in from the southwest and provoke slightly milder weather going into the weekend.

With high pressure still proving stubborn for the moment however it is difficult to make an accurate prediction, and the warmer air could yet be delayed until next week.