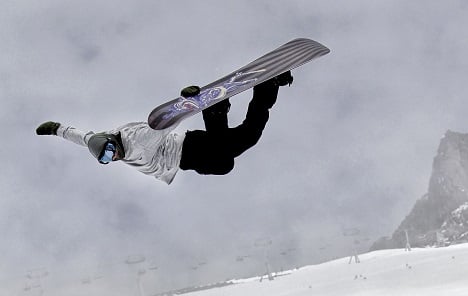 To anyone who loves snow and adventure – and came of age in the waning years of the Cold War – Terje Håkonsen is almost more myth than man. He dominated snowboarding competitions in the 1990s like no other rider, continuing to amass titles over the next two decades. He picked up his most recent win in Switzerland just this year.

He’s been called the greatest snowboarder of all time – attracting attention as much for his innovative tricks and riding styles as for his unwillingness to compromise his passion or principles, a trait that was on full display when Håkonsen – or Haakonsen as he’s called abroad – chose to boycott the Olympics when snowboarding was introduced to the games in 1998.

Indeed, the now 42-year-old Norwegian is known for living life on his own terms – even if it meant doing something outside the norm.

“I was an active skier and was on the regional alpine team, but when I discovered snowboarding I pretty much quit right away,” Terje recalls. “I was hooked. I sold my skis and gave half the money to my dad, since he had invested so much in my activities.”

'I go bigger than most people'

These days, snowboarding is still a big part of Terje’s life – he’s busy organizing the 2017 edition of his Arctic Challenge snowboarding completion. He’s also featured in Supervention II, a sequel to a 2013 snowboarding/ski documentary, which premiered in Norwegian cinemas on October 28th.

And while he’s the first to admit that snowboarding has evolved a lot since the 80s and 90s, he’s quick to point out some of the ways he influenced the sport.

“Some of the riding I am known for is because I go bigger than most people. I have as much speed as possible and make it look fun and easy,” Terje says.

“We didn’t focus on contests and we didn’t have a serious agenda. But we worked with snowboard companies and pushed them to make better products.” But Terje’s desire to push for better products has moved beyond the slopes and into an effort to help people think more about what they consume in their everyday lives.

“Nothing is perfect. But it comes down to things like our drinking water, the soap we buy, the toothpaste we buy. Everything goes back the source,” Terje says. “People think that they have to buy the sprayed vegetables and the chicken with steroids because everyone else is. But consumer power can change things, if people have more pride and don’t just go along with things.”

As Terje sees things, too many people sit by passively watch things get worse – or put the blame in the wrong place.

“We have hashtags like #FuckCancer, but that’s not the problem. The problem is everything around us that causes cancer. You can hashtag Fuck Cancer as much as you want, but it doesn’t help if you don’t go to the source,” he explains.

He was 15 and on a trip in California. As the car he was in approached San Francisco, he saw a thick brown layer surrounding the city.

“It was nasty,” he reminisces. “A lot of people live in beautiful corners of the world – like Norway – with no big factories or cities around, and they think they live in paradise. But if you just travel a little bit you can see all this damage.”

After that, Terje became much more aware of his choices and those around him – even back in clean, fresh Norway.

“I remember once when a neighbour came to see my dad, and he left his car running for 20 minutes. I said, ‘Hey, man, if you’re going to drink coffee, why don’t you turn your car off?’” Terje recalls. “He said, ‘Well, we live in such a clean place that it doesn’t matter.’ And I just thought, fuck. Everything counts, even a little bit. So now I try to make everything count.” For Terje, focusing on sustainability is an obvious choice.

“I think everyone agrees we want clean air, clean food, clean everything. Everyone would say it’s important. It’s just logical, you know? So why don’t we do it?”

And Terje is certainly doing it, having co-founded Greener Events, an organization offering seminars and workshops intended guide people to making all their events sustainable – anything from a massive conference to a child's birthday party.

“I started it with Jan Christian Sundt, a man with a couple of organic farms in England,” Terje says. “He’s not a flashy rich guy, he just does a lot of work for sustainable living. He had this idea to make an event with no waste at all. So, we started Greener Events, where people can get info and help to make any kind of event more sustainable.”

The organization has grown and is starting to tackle “bigger issues” – but Terje says it’s important to him that they work with the smallest of events as well.

“Like at a birthday – sure, it’s always cool to have Peter Pan paper cups, but do you really need them? No. Teach your kids that we don’t,” he says.

It’s something he has worked hard to teach his own children.

“When I send my kids to a birthday I tell them what not to eat and what to stay away from. Every time you support a product that’s not sustainable, you damage the future for yourself and for your kids.”

Even Terje’s own snowboarding competition, Arctic Challenge, was partially inspired by sustainability.

“I founded it because in the 1990s there were a lot of bad competitions. I don’t really like contests where you sit in a room and stare at your starting list, and I also went to a lot of events where they served shit food,” Terje remarks. “We wanted an event with proper food, not sodas and waffles and hot dogs, and where we printed on both sides of the paper and used hybrid cars. It makes more sense.”

The Nordic nations are already some of the best in the world when it comes to sustainability, but Terje cautions that doesn’t mean they can get lazy.

“We talk too much about sustainability; we need more action,” he says. “Nordic countries have good values, but we can be so much better than we are. It’s so important to keep fighting for our values and not fall into the same hole as everyone else.”

This article was produced by The Local and sponsored by the Nordic Council of Ministers. All photos: Leo Cittadella