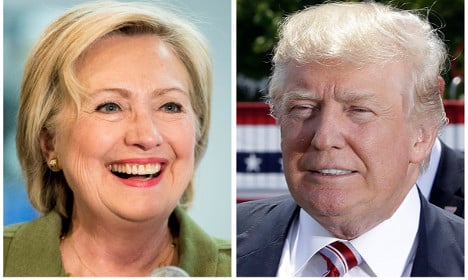 The Swedish coverage of Clinton v Trump has been extensive. Photo: AP

As the US goes to the polls, The Local speaks to Stockholm University journalism professor Christian Christensen, an American living in Sweden, on just how much attention the race to the White House is getting in the Nordic nation and what the coverage has been like.

Has the coverage in Sweden been particularly extensive? Are Swedes obsessed with this presidential race?

With someone like Trump the coverage has gone up probably 50 percent more than usual even from the start of the primary campaign. Primaries have been covered previously, but with Trump’s comments, it has been a bigger deal.

For the presidential campaign that level has probably maintained, so I think there’s a much bigger level of interest among the general population in Sweden now. A, because you have Trump, and B, because you have Clinton possibly being the first female president.

If Clinton was up against a more traditional Republican candidate I’m guessing there might be slightly less interest in the election. I’m guessing that, as strange as it may sound, the Trump element is probably the biggest thing, the possibility of him winning.

The fact that it would be an historic election if Clinton wins as a female president is lost a little bit as a result, but really you have two very big factors feeding into the interest level. Plus the fact that Trump is also a misogynist doesn’t hurt.

You’ve got, from a Swedish media perspective, a very tightly scripted election where you have a very successful female politician who has spent a lot of time in public office, up against a person who has never spent time in public office and is a sort of outspoken misogynist. So obviously you have a tailor made story, forget about the election, if this was something else it would still be a story.

The Trump character is really the cartoon character. Clinton is more of a straightforward political figure, but Trump’s cartoonish nature has made the juxtaposition between himself and Clinton very stark. US elections are always a big deal particularly in Europe, but I think this has really made this one have a crazy level of coverage. What’s your overall impression of the coverage in Sweden?

In Sweden I think the problem is like a lot of coverage of the election not just here, but in the US as well, there’s relatively little discussion about the detailed policies of the candidates. For all of the airtime and ink, I don’t think people here really know that much about… Trump doesn’t have any policies and people don’t know them on Clinton’s side too.

The other thing is that from a European and Swedish perspective there’s this sense that Clinton is obviously the far better candidate. The problem however is that I would say from a Swedish perspective, Clinton would basically qualify as a centre-right politician in Sweden. She would not be on the left block.

But because Trump is such an extreme character there’s this sense that Clinton is the more progressive candidate. What gets lost in this whirlpool of sensationalism and personality is the rightward drift of US politics. Trump has just exacerbated that because he has gone so far to the right that even mainstream Republicans seem more centrist than they used to seem.

I think that if you’re going to have a really serious critical discussion about US politics you have to address the fact that Hillary Clinton is a very status quo, very fiscally conservative candidate who in her tenure as Secretary of State oversaw many things that I think many European politicians on the left would consider unacceptable.

She hasn’t come out against the death penalty for example, she was Secretary of State when the US rearmed Israel when they were shelling Gaza, so many of the things that get lost in this election are some of the policies Clinton has and some of her financial connections which I think would make her an unacceptable leftist candidate in Sweden for example. It’s sort of lost because Trump is such an extreme character.

I think a lot of Clinton’s policies get ignored in Sweden because ‘we have to beat Trump’. That’s not just a Swedish problem, it’s a general problem. Clinton’s relative conservatism from a European perspective is lost in a lot of this discussion because it has been such a circus. That’s not necessarily something limited to this election, it’s something I’ve seen since I moved to Sweden ten years ago.

The Democrats are often pitched as the leftist party in the US, but it’s a leftist that’s relative to US Republicanism, and I think that is something Swedish journalists would do better to think about, the relative conservatism of the Democratic party.

Hillary Clinton and Stefan Löfven at an event in 2014. Photo: Pontus Höök/TT

Isn’t that something that’s the case everywhere though? The idea of left or right is almost always relative to the opposite side in the same country?

Of course. But I think the difference with the US is this notion that because of US foreign policy and the economy, having someone who is seen as a US leftist-progressive in the Oval Office has an impact on, for example, US militarism or what it might be.

Yet if you look at Obama’s tenure it hasn’t been a particularly dovish presidency. This has been a fairly aggressive presidency in the Middle East, the US has been droning consistently in Yemen and Pakistan, thousands of people have died, Guantanamo didn’t close – not necessarily Obama’s fault, but it didn’t close – Clinton was a fairly aggressive, strong supporter of Israel during some pretty horrific times for Gaza. So this isn’t… these are policies you could easily see a Republican president forwarding.

That’s where, though I understand it’s all relative, by not addressing the relative conservatism of people like Clinton to a European audience, you create this impression that this is a much better alternative for people who consider themselves to be progressive, that Europeans should be much more satisfied with Clinton.

They probably should be, but at the same time, I think it’s a problem that the European media has ignored the relative aggression of a lot of the Democrats, their reluctance to take on things like gun control too, another issue, sort of gets bypassed in the euphoria of this election.

I have a piece coming out tomorrow talking about this idea that we’re so hung up on ‘elections’ as a thing, that the day after them, well what happens to the African Americans, the Latinos, invited onto the stage, the gun control, sexism, the Trump grabbing women ‘by the pussy’ people? What happens on the ninth of November?

Are these issues still going to be discussed, or are we just going to say ‘he lost’, ‘he won’, ‘it’s over now, let’s move on to the next stage’? That’s the problem. The Swedish media is so focused on the election they perpetuate a problematic idea that the election is actually the thing. But the thing is really what happens the day after the election. Those are the things that… in the short term the Trump-Clinton personality clash is the exciting topic, but in the long term Swedish policy questions are what will matter. That’s where this lack of coverage really impacts people here, there’s rarely an understanding of what it’s going to mean in the long term.

Is there anything about the Swedish coverage that stands out compared to the rest of Europe?

Maybe in Sweden there’s a little more discussion about Trump’s racism and his Islamophobia, but that has been a fairly large topic in Europe to, so Swedish coverage mostly falls into line with other European countries.