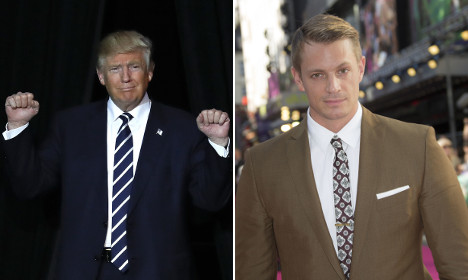 Donald Trump vs Joel Kinnaman has been a Swedish feature of 2016. Paul Sancya/AP & Joel Ryan/AP

1. Who wants to trump Trump?

What do you get when Swedish humour and Swedish tech-skills combine? A website where you can blast a trumpet in Donald Trump’s face (and hair), of course.

Back in February a few Swedish creatives came up with the simple idea of taking the US presidential candidate’s second name literally, but they soon discovered that putting it into practice was more complex than it seemed.

It was “fairly complex to work with Mr Trump’s hair,” Jacob Sempler, who was one of the people behind the site told The Local. Building the page was worth the effort though: TrumpDonald.org was praised (or endorsed, if you like) by Spotify founder Daniel Ek. At the time of writing it has chalked up no less than 137,451,428 trumps.

If you haven’t already (or just want to get one last blast in for good measure), feel free to give it a try here. You won't regret it. One of Sweden’s most outspoken anti-Trump figures is also one of the most visible Swedes of the moment. Actor Joel Kinnaman recently played Rick Flag, one of the lead roles in US blockbuster Suicide Squad, while he is also a key character in Netflix epic House of Cards, and the 36-year-old is no fan of the Republican presidential candidate, to make an understatement.

In August, Kinnaman, who is a US Passport holder thanks to his American dad, told Swedish magazine King: “If Trump wins we’re packing our bags and moving home to Sweden, that’s for sure.”

In case anyone didn’t get the message, a month later the actor elaborated in an interview with newspaper Dagens Nyheter, where he accused Trump of spreading conspiracy theories and being openly racist. To top it off, he regularly takes shots at the businessman on his Twitter feed, perhaps most notably in the below example:

Stop holding back and tell us what you really think, Joel.

Trying to find a needle in a haystack may be a tough task, but trust us, trying to find a Trump voter in Sweden is far more difficult. Back in September, The Local interviewed a number of American expats in Sweden about their opinions on today’s election, and while we found Democrats, independents, and Republicans, none said they were going to vote for Trump.

It seemed there really were no Trump voters on Swedish soil (or at least none willing to admit it), until last month we finally managed to get in touch with one member of the rare breed. The interview that followed provided a fascinating insight into what it's like being a lonely Trump voter in rural Sweden. It's hard enough to find another person in some parts of Dalarna, let alone a Trump voter. Photo: Rogelio V Solis/AP

4. Count Donald and Donald Troll hit the streets of Stockholm

Anyone walking around Sweden’s capital city lately may have noticed some pretty unique presidential election-themed artwork popping up around the place. If you spotted Trump as a troll or as Dracula, then you’ve stumbled across some of the contributions to “Pens For Freedom”, an initiative encouraging Stockholmers to draw the Republican candidate then post it on Instagram.

The contributions have ranged from political satire to outright silly, and can be viewed on the Pens For Freedom Instagram page. One of The Local’s editors even spotted a few just outside our office in southern Stockholm.

The last silly Swedish story to be spawned from the US election came courtesy of advertising agency Round & Round, who launched their “The Great Trump Escape” campaign a few days ago.

In a nutshell, it offers any Americans who want to flee their home nation should Trump come out victorious the chance to register their portfolios with the company, but the catch is that they will only be considered for a job if the New Yorker wins the presidential race.

Nahir Aslan, one of the people behind the initiative, told The Local on Monday that Round & Round would rather not have to open the files they have received, and indeed, that point is made pretty clear by the last line of the Great Trump Escape website, which states:

“Honestly, we really hope it won’t come down to all that. Get your shit together, America.”

It’s going to be a nervy day for those folks (and plenty of others).