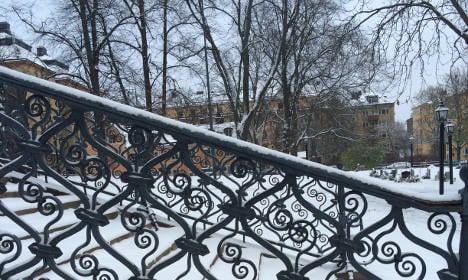 Not winter, according to Sweden. Photo: Catherine Edwards

At least not across the entirety of the Nordic nation that is – 'snow cannons' or not.

“The first bit of winter came to Sweden a while ago but it hasn’t hit the whole country,” meteorologist Sandra Andersson, who works for Swedish national forecasters SMHI, told news agency TT on Tuesday.

In meteorological terms, Sweden defines winter as when the average temperature stays at 0C or lower for five days in a row. That means that while most of northernmost province Norrland and some parts of central province Svealand are officially in winter, other parts of the country are not.

So it isn’t truly winter in Stockholm, Sundsvall, and even Umeå, according to SMHI’s map of where the season has taken hold.

Try telling that to these people:

Whether it’s technically winter by Swedish standards or not, SMHI have still issued a class-one warning for an area covering capital Stockholm to 200km north in Hälsingland, as well as Baltic islands Öland and Gotland. And snowfall is set to continue across various parts of the country in the coming days.

“In the easternmost part of Svealand there could be between five and 10 centimeters of snow. And up on the Gävleborg coast it could be – at least locally – between 10 and 15 centimeters by tomorrow morning,” SMHI’s Andersson said.

“Over Svealand, northern Götaland and even a little bit of southern Norrland there will be quite light snowfall, probably some centimeters,” she added.

But it's not winter yet, remember.