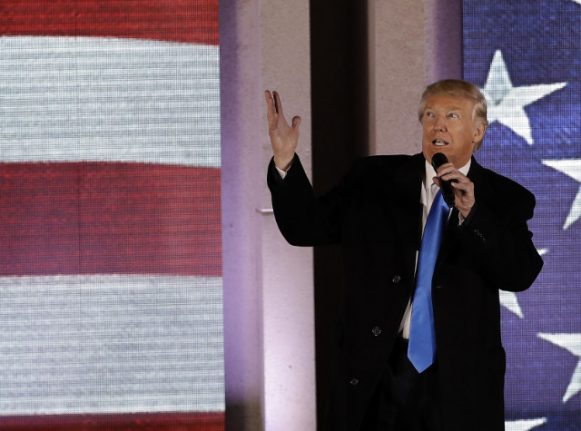 Robert Bergqvist is the chief economist at Swedish banking giant SEB. He told The Local that Sweden's biggest concern about Trump from an economic point of view is how his next moves may impact globalization and trade.

“In Sweden we’re very dependent on the international environment. Roughly 50 percent of our economy has a connection to it. So if the new Trump administration introduces any measures that will slow down global economic growth and slow down globalization, that’s negative for Sweden,” he said.

Torbjörn Isaksson, chief analyst from one of Sweden's other banking giants Nordea, agreed:

“The economic outlook is more uncertain for Sweden now after this, but that’s more regarding the medium term. We’re very dependent on foreign trade, and if it becomes a reality that he backs off from trade agreements with the Americas or southeast Asia and is very aggressive to China then world trade surely declines, or at least has a lower growth, which could hit Swedish exports and the Swedish economy.”

Gothenburg University political science professor Ulf Bjereld thinks that Trump’s relationship with Russia could be an issue for Sweden.

“How will Donald Trump handle US relations with Russia? Will the US prioritize a more isolationist American foreign policy, and thereby open up for increased Russian influence in the Baltic Sea area?” he wrote in an e-mail to The Local.

SEB's Bergqvist noted that US-Russian relations could also have economic implications for Sweden.

“Today in Europe there is a lot of focus on developments in Russia and the geopolitical stability of the region. So if we can expect any new relations between the US and Russia that could increase geopolitical tensions in Europe, and any new steps from Trump that suggest we’re going to have more geopolitical uncertainties, that could have political implications for Sweden, and therefore economic implications.”

Ian Manners is a political scientist specializing in the EU in global politics who lives in Sweden and did his master's degree on US studies. He is less certain that Trump’s relationship with Russia will be an issue for Sweden.

“From a foreign policy perspective Sweden’s position is more challenging because of the apparent closeness between Trump and Putin, but I think that’s superficial and it will dissolve after the first bad relationship between them occurs,” he explained to The Local.

“Though it’s certainly the case that Trump will be more isolationist than Clinton would have been and that may have consequences for Sweden, probably the most significant field isn’t Swedish-Russian relations, it’s undoubtedly the environment.” 3. Swedish startups have plenty to consider

Another key development for Sweden is the impact of Trump’s isolationism could have on the Nordic nation’s startups, many of whom do business in America. Tyler Crowley is a US-born entrepreneur who runs SthlmTech.com and is based in Sweden’s capital. He predicts that Swedish startups could consider looking elsewhere when branching out abroad.

“For Swedish startups, it’ll be interesting to see if Trump’s election maybe changes their preference for what market they decide to go to first. Maybe they won’t be so anxious to get into the US market,” he noted.

The American also said a Trump presidency could be an opportunity for Sweden to try to attract more international talent from the US.

“I think there is probably a younger generation of Silicon Valley folks with people who will probably consider moving. If I was Sweden – and some countries will do this – I’d put adverts out in Silicon Valley saying ‘come to Sweden, work here’.”

Political scientist Stig-Björn Ljunggren thinks one of the biggest things that can already be taken from Trump’s election is that populism works, a point that will be relevant in Sweden.

“You can expect in Sweden and Europe, other politicians will try to use Trumpian technique. This game-changing approach to elections,” he emphasized. “The result tells the populist to keep on the chosen path.”

Copenhagen University’s Manners agrees, and insists that populist rhetoric needs to be better dealt with in Sweden.

“I think Swedish Stockholm elite and I think Swedish academics as well, and Swedish journalists need to understand how some people think and why they’re unable to communicate to them. SD, Trump, the Tea Party, Brexit, Ukip, they all play the same game. They play on structural disadvantage through fears. It’s the narratives based upon disadvantage, those that feel they’ve lost out one way or another.”

#BigData fails to predict the effect of the biggest trend in the world: populism. #trump #brexit

5. A challenge for the Swedish government

Gothenburg University’s Bjereld also noted that the Swedish government will now be forced to keep an open mind as it starts to deal with the reality of a Trump presidency.

“I am sure the Swedish government will give the new Trump administration a chance. We don’t know how much of his rhetoric will transform into concrete policy,” he highlighted.

And fellow political scientist Ljunggren thinks that Sweden’s politicians will be looking at every minor detail of Trump’s next moves.

“They will of course have done some analysis on what would happen if he won, but in the next weeks they will closely monitor the kind of people he surrounds himself with. It could influence Swedish politicians to stick together more, that’s a consequence some would think is good,” he concluded.

This article has been updated since it was first published in November 2016.