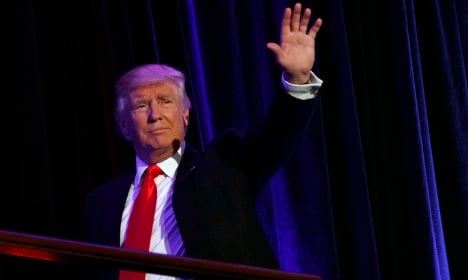 As far as we're aware he wasn't one of the applicants. Photo: Evan Vucci/AP

On Monday, advertising agency Round & Round explained that constant discussion over the US election in their office led to them creating the “Great Trump Escape” website, which allowed people to register portfolios for future positions at the company, on the condition that the files would only be opened if Trump won the election.

As virtually everyone knows by now, the improbable happened. And no one is more aware of the election result than the people sorting through the 'Great Trump Escape' applications.

“We’re painfully aware of the outcome,” Nahir Aslan from Round & Round told The Local.

“We didn’t expect it, but now that it’s a fact we’ll see what happens. The polls all said Hillary Clinton would win, so we thought this would be a good way to just make a little fun of the election,” he admitted. Aslan said the atmosphere in his Stockholm office was a strange one on Wednesday morning.

“Everyone was a little bit let down. The happiness just wasn’t there in the office yesterday for some reason.”

The staff won’t have much time to dwell on things however, as they now have hundreds of portfolios to go through.

“We got more than 350 portfolios. It’s a massive amount of creative, interesting and talented people reaching out and sending theirs in, beyond our expectations. The people are interested in work, but they would have done this out of serious concern I guess,” Aslan speculated.

“There’s a concern for the world, but we’ll manage now, and we have this huge amount of applicants wanting to join us. We need to grow and won’t have any problems doing that,” he concluded.