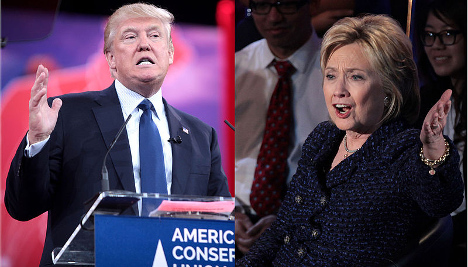 In case you missed it, there was an election in the United States this week — something that had much of Sweden (and the world) talking.

Swedish media devoted an incredible amount of coverage to the election — perhaps as much (or even more) than was devoted to Sweden’s own parliamentary elections back in 2014.

National broadcasters and major newspapers had more or less round-the-clock coverage for the 48 hours surrounding the US elections, with voting starting Tuesday afternoon Swedish time and developments keeping political junkies up in the wee hours of the morning on Wednesday, November 8th.

And sometime around 8am that morning, with snow pouring down over large swaths of Sweden, it became clear that Republican Donald Trump had defeated Democrat Hillary Clinton to become the 45th President of the United States.

Trump’s victory seemed to take many in Sweden by surprise — with most commentators, experts, and everyday Swedes having expected Clinton to win.

Unsurprisingly, the opinion pages of newspapers across Sweden were awash with reactions and analyses of what a Trump presidency might mean for the US, Sweden, and the world.

Below is a selection of headlines and arguments from different newspapers to help you get a better idea of how Sweden is reacting to the election.

That the majority of the US electorate voted for a campaign full of lies, racism and sexism is, according to Skånksan opinion writer Yngve Sunesson, just one reason why the world is now a more dangerous place.

Now the world is “nervously holding its breath” wondering what President Trump – the world's most powerful man – will do. If he sticks by the various pledges he made during his campaign, the ramifications will be felt around the globe, including Sweden.

“How will Trump follow up his statements that there's no point in having nuclear weapons if you're not going to use them?” asks Sunesson.

Many of Trump’s international policy positions are cause for concern, argues Sunesson, citing his promise to tear up the NAFTA trade agreement and desire to terminate the Paris Agreement on climate change as examples.

And Trumps has denial of NATO’s solidarity clause, while not only unnerving the Baltic states, represents an indirect threat to Sweden's security.

And, of course, there’s TTIP, a trade deal in the making between the US and EU – the negotiations for which, Sunesson writes, are now unlikely to resume. In conjunction with proposed tariffs against China, could a global trade war be looming on the horizon?

A disconcerting thought for such export dependent countries as Sweden, says Sunesson.

“Trump as president creates deep concern in the world. The worst problem is his unpredictability, which means that anything can happen — even nuclear war,” he concludes.

“Can Europe trust the United States?”

The Founding Fathers of America were worried about precisely this type of situation — having an “unsuitable” person being elected president. That's why they implemented a complicated system of checks and balances. But now, argues NSD opinion writer Torsten Nilsson, that system has failed.

Now the question, he muses, is if the Constitution can protect its citizens from a president 'drunk on power'.

Nilsson also warns that the Swedish debate about whether to join Nato may have effectively died with Trump’s election. “What’s the point of joining Nato if the US is no longer ready to defend the Baltic region if Russia attacks?” he asks.

Moreover, the US election is not an exception, he adds. It's a trend casting a shadow on Europe.

“The Social Democrats in Europe can learn what happens when you turn your back on old voters in the hunt for new ones,” he concludes.

“The crowning achievement” after a series of successes for populists worldwide,” – that’s how UNT describes Donald Trump’s 2016 presidential election victory.

From Brexit to the Colombian people’s rejection of Farc’s peace deal – 2016 will certainly be remembered as the year of shock election results.

A rejection of the Clinton political dynasty, UNT speculates, and thus the political establishment, is what led to her defeat. The credence behind such speculation is reinforced by Brexit, and the vote against supposedly disillusioned politicians by ordinary people.

Just as a significant proportion of the British people were led to view Farage as a man of the people, Trump – under the same guise – has seemingly convinced the majority of the US electorate that he is the tonic to the political establishment that Americans are fed up with.

Unlike Farage, however, Trump cannot resign or go into hiding while others pick up the pieces. “Donald Trump must take responsibility,” says UNT. In what form will that responsibility transpire? We can only wait and see.

“The consequences could be incalculable,” UNT continues, “but another possibility is the exact opposite, that nothing happens.”

What was called the most important presidential election in history was preceded by months of Trump supporters being called uneducated idiots — and his victory proves once again that simply dismissing large groups of voters as simply not understanding what’s good for them has failed.

“When will the establishment start to take them seriously regardless of what you think of their views?” asks GP opinion writer Alice Teodorescu.

She sees similar trends across Europe and in Sweden, arguing that the root cause isn’t so much nationalism, but a reaction to a state apparatus that doesn’t seem to be fulfilling its core mission for large numbers of people.

In the US, as in Sweden, voters are concerned about immigration. And the Sweden Democrats were the only party that listened. At first other parties “put their heads in the sand” and by the time they started paying attention, it was too late, she argues.

“In two years, we will have elections in Sweden, and what happened in the US is only a hint about what can also happen here,” concludes Teodorescu.

Expressen, a national tabloid newspaper based in Stockholm

Voters in the United States have chosen an “unbalanced liar” as their president.

“Be afraid. Be very afraid,” warns the Expressen editorial citing a popular 1980s horror film, ‘The Fly’ over the fact that American voters chose Trump over Clinton.

Expressen strikes a less pessimistic tone, hoping that Trump may not actually try to implement all his campaign promises, or that the complexity of how government works simply won’t allow him to do so.

“This is a nightmare for everyone who cares about liberal democracy and the idea of a well-intentioned western world,” argues Expressen, adding that “the risk is great that this reality-tv star president will be a major disappointment.

Click here to read the complete article in Swedish