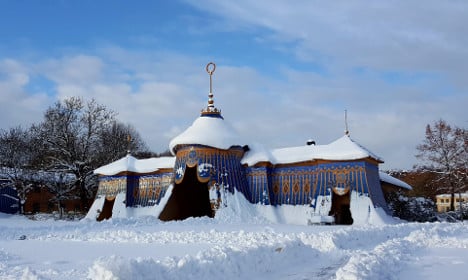 Heavy snowfall means that a few unlucky souls are required to scale Sweden's rooftops and clear the stuff from them before it becomes a hazard for the people walking below. Jairo Hurtado captured one of the tricky clearing jobs.

Bikes in trouble near Handelshögskolan
It's a good idea to keep your bike in indoor storage at this time of the year as the weather turns, and the people who fail to do so tend to find that out the hard way, like in this picture taken near Stockholm's Handelshögskolan by Helene Ibbe. Visby takes on the snow once more

Baltic island Gotland has also been subjected to some pretty bad weather this week, but with a history dating back to Medieval times, its main town Visby has seen it all before. Vanessa Massera captured a great shot of snow falling on the holiday town.

Trees trembling in Stockholm
Ida sent us the below image of an evergreen tree caked in snow after the worst of the storms in the Swedish capital.

Hagaparken’s Copper Tents are distinctive looking at the best of times, but the combination of snow and icicles in this photo from Helena Brikke make the building even more eye-catching.

A peaceful scene from Gävle

Known for its giant Christmas goat (and the habitual burning of it down), Gävle in central Sweden also saw plenty of snow this week, but the smaller city looks much more tranquil than the capital in this picture from Ester Weismann.

The Swedes claim that there’s no such thing as bad weather, only bad clothing, but that wisdom is really being put to the test in this image from Vanessa Doveri. Vehicles vs the snow

To say that Stockholm's traffic turned into chaos on Wednesday is putting it mildly, and in this image of a huge truck struggling against the snow from Sana Younas, it’s easy to see why.

Gamla Stan at its most picturesque

Stockholm’s Old Town is an amazing place to look at, but add snow to the equation and it ends up resembling a perfect postcard, as this picture from Christos Keskinis shows.