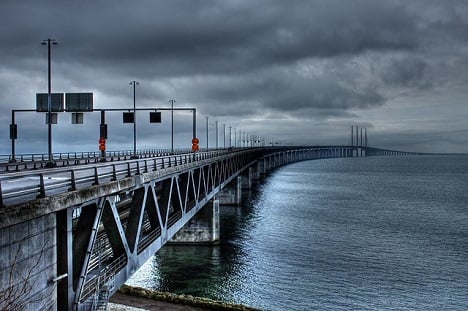 The Öresund Bridge between Malmö and Copenhagen. Photo: Pixabay

Over the course of nearly four seasons, ‘The Bridge’ (or Bron in Swedish) has firmly put Sweden, and Malmö in particular, on the map. The Swedish/Danish crime drama has captivated audiences all around the world with its blend of Nordic noir, quirky characters and gripping storylines.

The show has been a shot in the arm (rather than the head) for local tourism with fans flocking to see many of the landmarks featured in the programme.

“About 80 percent of the locations from The Bridge are to be found in Malmö, although when you watch the series you get the impression it’s 50-50.  But for economic reasons, for money and time, production is largely in Malmö even for the scenes representing Copenhagen. They have their headquarters here so it’s easier,” Eva Roos Davidsson, who runs The Bridge Tour in Malmö, told The Local.

As the fourth (and final) season draws to a close, The Local paid a visit to five of the murder spots in Malmö, which have featured in the show since it first hit our screens in 2011. On screen:An obvious place to start and the location of the first murder in the series. The show begins with a corpse discovered at the border of the bridge, which links Sweden and Denmark, and the first encounter of the show’s main protagonists: Swedish cop Saga Norén and her Danish counterpart Martin Rohde. Turns out the grim discovery is actually two bodies: half a Swedish politician and half a Danish prostitute. And so it all begins. The Öresund Bridge also crops up in the last episode of the first series when Rohde has a showdown with his nemesis; the so-called ‘Truth Terrorist.’

In real life: Thousands of people cross the bridge every day to commute to work in both countries – or to get to Malmö from Copenhagen Airport. Attempting to visit the actual location (and get a selfie) featured in the series is a tall order as the bridge is for vehicles and trains only. Despite regular warnings from the police, there have been numerous arrests over the years of people trying to cross the bridge by foot. Not recommended! On screen: In season one vulnerable young girl Anja Björk goes out for a walk on a dark Malmö night. Naturally, with this being The Bridge, she can’t be just heading out for a falafel and instead winds up being shot in an underground carpark. She survives, only to die in hospital after the strain of sketching her killer proves all too much.

In real life: The carpark location is more accustomed to witnessing deliveries for a well-known supermarket, prompting late-night shopping rather than shooting sprees. Directly opposite the carpark is a primary school and a busy bike lane. Just around the corner is the bustling street (Friisgatan) where you can find all manner of delights including a comic book store, tattoo parlour, surf shop, indie clothes stores and plenty of places to enjoy some Swedish fika. The police station, which features in the show, is only spitting distance away too. Speaking of which…

On screen: One of the more brutal murders of the first series takes place in the hipster location of Möllan. Social worker Stefan Lindberg, who sports a terrific 70s style moustache, savagely beats to death another man in his apartment with a steam iron, which he has just used to iron his shirt. Classy.

In real life: Bridge spotters will have a whale of a time at this location. The facade of the police station, used in the first season, is directly opposite the murder location. In real life, it is a health care centre. Just around the corner is the facade of the police station used in the second and third seasons – in reality, it is home to numerous offices including a yoga studio and a jobseekers centre. The street (Barkgatan) is also where Saga regularly screams to a halt in her distinctive green Porsche, which nowadays can be found on display in the Malmö Technical Museum (presently on loan for shooting of the new series). On screen: Another gem of a scene takes place within the spooky confines of the old Malmö football stadium. Gang member Julian attempts to meet up with the aptly named ‘mother of three’ and asks his sister (Laura) to come along and film the whole encounter, which takes place at night. Thing is, Laura fails to record the meeting and instead can only see her brother’s dead body before trying to make a break for it herself across the roof of the stadium, with the killer in tow.

In real life: Malmö Stadium was built for the 1958 World Cup and was the home of the local football team (Malmö FF) until 2009. Nowadays it is a throwback to a bygone age with its rusty turnstiles and paint flaking off the terraces. Malmö FF’s funky new home is adjacent to the old ground. It has been mooted that Malmö Stadium may soon be demolished so catch it while you can. Photo: Karl Isakson for The Local

On screen: In the second season this is the place where four of the bizarrely named ‘eco-terrorists’ are discovered dead in a container. The quartet were apparently poisoned and then ditched in the remote location. Incidentally, the cement factory crops up again in a later episode when it is being evacuated.

In real life: Precious little remains of the old cement factory, most of which was knocked down shortly after filming took place. One large tower is still standing tall and there are a handful of partially demolished smaller towers. The location is now a large scale construction site of high-end apartments; yours to own in 2017. Once built the apartments will offer fine views of a Malmö landmark; the Öresund Bridge.

No murders took place here – but they’re still great Malmö hotspots featured in The Bridge! So if the mood should strike you, head on down to… A must do for any visit to Malmö is to go for a walk along the beach and visit the cold bath house, which is more fun than it sounds. The bathing house, with the distinctive long boardwalk, is featured in the first series when Saga and Martin go to interview a waitress who works there. It’s not a place to be shy as it is recommended to leave all your clothes in the dressing room when you enter the sauna! Malmö’s best-known falafel restaurant is located on Bergsgatan, which is only a short walk from the police station featured in the show. It crops up in series two when Saga’s boyfriend calls her from Jalla Jalla to end their relationship. She memorably asks if they can continue having sex! The busy thoroughfare, named after the late Swedish politician, is where the newsroom in the first series is located, in a top-floor office. It leads to Malmö Central Station, which also features on several occasions throughout the series.