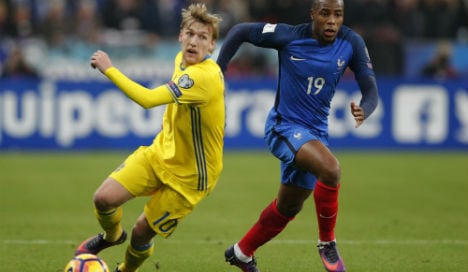 Sweden's Emil Forsberg, right, outruns France's Djibril Sidibe on Friday. Photo: Christophe Ena/AP/TT
French president Francois Hollande was at the game to pay tribute in a capacity crowd of 80,000 at Friday's match, which was played on a national holiday to mark the day that ended the First World War in 1918.
A minute's silence was held in memory of the victims of the terror attacks that struck the French capital, and the Stade de France, almost exactly a year ago.
France were playing Germany in a friendly on Friday November 13, 2015 when three suicide bombers blew themselves up immediately outside the ground.
A 63-year-old man, Manuel Dias, was killed by one of the explosions at the beginning of a night of terror around Paris that killed 130 people and injured many more.
On Friday evening Emil Forsberg put Sweden in front from a free-kick early in the second half at the Stade de France in a meeting of the top two teams in Group A in European qualifying for the 2018 World Cup.
But Pogba headed in the equaliser in the 58th minute and Payet profited from a goalkeeping error to score the winner and allow Les Bleus to move three points clear of Sweden at the top of the section.
“Decisive no, but important yes,” was how France coach Didier Deschamps summed up the significance of the result.
“It was a difficult game but the result is all that counts. Sweden made things complicated for us.”
The French team featured many of those who had played in that game against Germany, including Arsenal striker Olivier Giroud, recalled in attack in place of Kevin Gameiro.
They had numerous chances in a bright start to the game, with Swedish goalkeeper Robin Olsen saving well from a curling shot from the edge of the box by Payet.
Pogba and Moussa Sissoko also sent efforts just over the bar, but Sweden — fielding a rejuvenated side as they rebuild following the international retirement of Zlatan Ibrahimovic — were an occasional threat too.
Indeed, they should have taken a 10th-minute lead, but John Guidetti, inside the six-yard box, was unable to convert a Ludwig Augustinsson free-kick from the left.
And they stunned the Stade de France when they went in front in the 54th minute, the impressive RB Leipzig winger Forsberg sending in a free-kick from fully 30 yards that left Hugo Lloris rooted as it swerved through the air and in.
However, France were level just four minutes later when Payet delivered a free-kick from the left and the world's most expensive player Pogba just beat team-mate Raphael Varane to the ball to head in his eighth international goal.
The relief was palpable and France — who have needed play-offs to qualify for each of the last two World Cups — went in front on 65 minutes.
Olsen failed to hold a cross under pressure from Antoine Griezmann — who was just offside when the ball came in — and Payet pounced to roll the ball in.
Griezmann almost got a third but Sweden made it a nervy finish with substitute Isaac Kiese Thelin missing the target with a great chance to equalise.
Their coach Janne Andersson was left to bemoan the lack of an offside call at the second goal.
“We deserved a better result. It is a bit of a shame because the second goal was offside, but these things happen in sport,” he said.
The Netherlands can join Sweden and also close to within three points of France with a win away to minnows Luxembourg on Sunday.
France are next in qualifying action in Luxembourg in late March, although they play the Ivory Coast in a friendly in Lens next Tuesday.