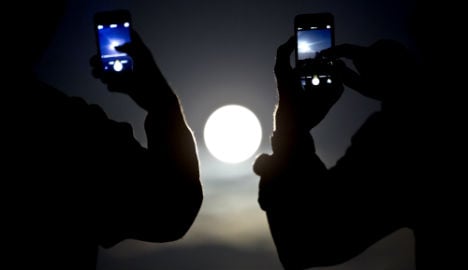 Enthusiasts photograph a far less impressive supermoon in Stockholm in 2014. Photo: Erik Mårtensson/TT
According to Swedish weather forecaster SMHI, the areas where people had the best chance of catching a glimpse of the haunting phenomenon were south of Norrland on Sunday night, and in  southern Götaland, south of Stockholm, on Monday.
“Cloud forecasting is generally tricky, but on Sunday afternoon and evening it looks like southern Norrland is going to be the least cloudy,” Sofia Söderberg from SMHI told the TT newswire. “There will definitely be a few places with a clear view.”
“For Monday, the best chance is in southeast Götaland,” she continued. “Otherwise it’s more or less cloudy across the country.”
People living in Stockholm came close to experiencing the phenomenon on Saturday night when a cloudless sky came when the moon was just one day from its full size.
A supermoon takes place when a full moon comes at a time the moon is at the closest point it gets to the earth during its elliptical orbit, making it appear as large as it is possible to be from the earth.
According to earthsky.org Sunday’s supermoon will be the largest since January 1948, and will not be rivalled again until 25 November 2034.
At 12.23 on Sunday afternoon, the moon will be just 356,509 kilometres from the earth. At its greatest distance the moon reaches 406,000 km from the earth.
On September 2015, a supermoon coincided with a lunar eclipse.