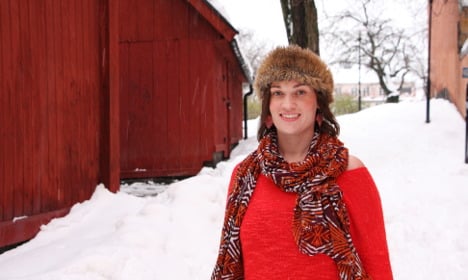 Anita Tatlow did not dislike life in London. She had a good job as a teacher and her husband Benjamin worked in marketing. Just married and having graduated a few years earlier, it ticked a lot of boxes. Their passion for music would have to wait. But as it turns out, there's only so long creativity can be put on hold.

“We were both working 11-hour days, and when you have other passions that you want to pursue it is kind of inhibiting. We tried to write music in the evenings, but never had time,” she tells The Local, explaining that with Benjamin being born in Sweden, the idea of moving there had always been at the back of their minds.

“Then on a holiday to Gambia we ended up talking about life and maybe moving to Sweden and one of us said 'well, why don't we just go?' Four months later we moved. It was the most epic road trip: we had to have winter tyres for Sweden, but couldn't hire a van one-way, so Ben flew to Sweden and drove to the UK.”

Almost three years later, the adventurous couple have found that famous Scandinavian work-life balance they were looking for back in London. They are employed 50 percent as church musicians for an international church in Stockholm and spend the rest of the time working on a number of creative projects.

“It all fell into place. We were prepared to work, but when we left London we decided that we weren't going to take any jobs just for the sake of it,” says Tatlow. “But sometimes you enjoy the other things so much that you end up working the same hours. We have to actively force ourselves to take time off,” she laughs.

Stockholm may have gained a reputation in recent years as a hub for tech entrepreneurs and startup whizzes wanting to test their wings, but Tatlow says it provides the perfect environment for creatives too.

“Setting up a company in Sweden takes a little bit of time, but it allows for that and encourages independent artists and entrepreneurs. In some ways it's a lot more forward-thinking than other countries,” she says. “We took five weeks off work this summer to travel around south-east Asia and that's encouraged.”

“You meet so many fascinating people here from all continents. It sounds like a cliché, but I have met more people who are actively pursuing their passions than I ever did in London. I think the English school system pushes you in certain directions and in Sweden it's more diverse.”

“Stockholm is a very interesting city too. There are so many things popping up here all the time. We found a new second-hand shop the other day, Siv & Åke on Södermalm, set up by two people who also just wanted to pursue their passion and just went for it,” says Tatlow.

But how can you afford to take time off secure employment and work on freelance projects while living in one of Europe's most expensive capitals? Well, Tatlow says, Stockholm can be cheaper than you think.

“Even when we earned less here than in London, we found ourselves with more expendable income here, because in London all your money goes on your housing, which it doesn't here, whether you own or rent. House prices aren't quite as extreme as London. Drinking is more expensive here, but I find eating out is about the same as London, if you know where to go” she explains.

This is partly what prompted her to set up her 'Stockholm on a shoestring' blog. Today the site has become one of Tatlow's main projects, and brings in a bit of money too, but it began mostly as a hobby and a way of exploring and getting to know her new home when she and her husband first moved to Stockholm.

“Everyone says to you that Stockholm is a really expensive place to live and I thought 'that can't be true. There must be fun things to do here that don't break the bank',” she says.

After spending her three years here exploring the capital for the blog, she is keen to share her insider tips with newcomers. One such thing, which tourists are often not aware of, is the well-known fact among locals that nearly all Swedish restaurants offer special lunch deals from Monday to Friday, serving up hot meals for around 80-100 kronor ($8-12). Add another 40 kronor and dine at some of the poshest places in town.

“Why would you pay more than three times as much to go and eat there in the evening? There are also quite a lot of free museums out there. I also tell people to embrace the outdoor Swedish culture. I really think that Stockholm is one of the most beautiful cities in Europe.”

But Stockholm on a shoestring is not just for tourists. It is also a resource for locals who want to stop going to the same old places every week and explore something new in their hometown – or those who want to share their favourite haunts in the capital with the rest of the internet community.

“It's a real platform of sharing knowledge. We want it to be a community, because we don't know all the best places – I've only lived here three years. The blogging community is really nice here. I think I probably know all the English-speaking bloggers in Stockholm by now,” laughs Tatlow. Because her husband had family in Sweden and spoke the language, settling into Stockholm was easier for the 29-year-old blogger and musician than it may have been otherwise. Not that it was all smooth sailing.

“It takes time, but I like the challenge of learning a new language, culture and rhythm of life. It took me a while to get used to the language, having never learned a new language before.”

“I've found the cultural differences more intriguing than challenging. You realize how much culture plays a part, just trying to understand how people function and why they do what they do. I think everyone should experience being exposed to a new culture at some point in their life.”

Her and her husband's long-term plan is to eventually become completely self-sufficient on their creativity and music as the duo Salt Of The Sound, which aims to create and explore new strands of Christian and spiritual music. But if this will be in Stockholm or beyond is not yet decided.

“Right now we feel quite settled, but at some point we may get itchy feet,” says Tatlow.

“I would love to move to Asia, somewhere where there's a completely different culture and language. One thing I definitely don't want to do is regret never having tried it – some of what we have done has worked out and some hasn't, but I don't regret having tried it. I'd rather try and fail.”

While she knows from experience that packing your bags and moving to a new country on a whim is daunting and difficult – she also argues that it is exhilarating and worth every struggle.

“I have a few friends who say 'I might move abroad' and I tell them 'you've got to just go for it'. We were lucky in that we had contacts here; it's not easy forging new relationships. But broadening your perspective on life is never going to be something you regret. The world is such an incredible place.”

1. Lucia celebrations. “That's such a cultural, beautiful thing, and a lot of the Lucia processions are cheap or free and are taking place across the city.”

2. The Vasa Museum. “This is where we send everyone. It's not free, but it's really good value. I think it's one of the best museums in the world.”

3. Experience the outdoors. “Come with your cold weather clothes and brave the cold as the Swedes do. Then make sure you go inside for a fika.”